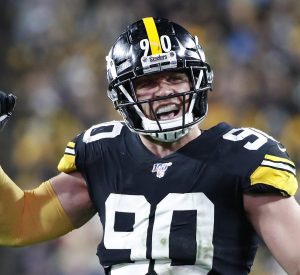 Plenty of NFL players were paid handsomely in free agency this offseason, even with a diminished salary cap. The reality is that young talent will always be rewarded.

The bottom line is that if you’re a young standout and it’s your turn at the negotiating table, you’re probably going to break the bank. The trend will continue in 2022, as several franchise-tagged players will hit free agency, and many more 2017 and 2018 draftees will come off rookie deals.

With the salary cap expected to be back on the rise next year, we may even see a handful of record-setting pacts. So, which players are most poised to break the bank next offseason?

Green Bay Packers wide receiver Davante Adams has already gotten his big second contract. He signed a four-year, $58 million extension in 2017. However, Adams is entering the final year of that deal and could soon become one of the league’s highest-paid receivers.

Spotrac projects Adams’ market value at $24.9 million annually. That would place him only behind DeAndre Hopkins in yearly salary.

Green Bay could extend Adams’ deal this offseason, though obstacles exist. The Packers are $10.9 million over the cap, and while a creative extension could provide relief, there’s no guarantee Adams would be interested in that sort of deal.

With Jordan Love in tow, future Hall of Famer Aaron Rodgers‘ time with the team might be limited, which could affect Adams’ decision.

“I think he ends up ending his career in another place,” former Packers great Charles Woodson told Zach Gelb of CBS Sports Radio.

If Adams doesn’t return to Green Bay, the Indianapolis Colts could make a ton of sense. Assuming quarterback Carson Wentz regains some of his Pro Bowl form, the Colts should be playoff contenders for the next few years. They’re also projected to have the most cap space in the league next offseason.

Cap space will be key because Adams—a four-time Pro Bowler coming off a 1,374-yard, 18-touchdown season—won’t be cheap.

When the Seattle Seahawks traded for safety Jamal Adams last July, most assumed a contract extension would soon follow. However, Seattle has yet to lock up the versatile defensive weapon and doesn’t appear interested in pressing the issue.

“Is Jamal Adams a priority for the Seahawks this offseason? Without a doubt,” former NFL quarterback Jake Heaps told ESPN 710 Seattle. “Was it going to get done early on in the process? No!”

Heaps explained that Seattle typically waits until after the NFL draft to address long-term contract extensions, so Adams could still get his deal this offseason. If not, he’ll hit the open market in 2022.

A return to Seattle would make a ton of sense, but other teams will be in the mix. The Denver Broncos, for example, are projected to have the fourth-most cap space next offseason and could look to pair Adams with Pro Bowl free safety Justin Simmons. Such a move would be costly, but it would give Denver arguably the best safety duo in the league.

Expect Adams to top the four-year, $61 million deal that Simmons signed this offseason.

There’s a chance Baltimore Ravens offensive tackle Orlando Brown Jr. is traded this offseason and immediately signs a contract extension. The starting right tackle would prefer to play on the left side and has asked to be dealt.

However, as The Athletic’s Jeff Zrebiec pointed out, Baltimore may not be inclined to move him.

“If the Ravens had already gotten an offer that they believed was appropriate value for a two-time Pro Bowl tackle who hasn’t yet turned 25, they would have already made the deal,” Zrebiec wrote at the end of March.

With Ronnie Stanley—assuming he is healthy after ankle surgery ended his season—entrenched at left tackle, Brown likely won’t re-sign.

The latter filled in for Stanley for much of 2020 and made his second consecutive Pro Bowl. Having been a Pro Bowler at each tackle spot, the soon-to-be 25-year-old should be one of the league’s most coveted free agents in 2022.

If the Colts don’t find an adequate replacement for retired left tackle Anthony Castonzo in this year’s draft, Indy could be a prime landing spot for Brown. The team is expected to have the most cap space in the league next year.

The Kansas City Chiefs would also be a terrific destination. They’re projected to have only $18.3 million in cap space next year but released starting tackles Jake Fisher and Mitchell Schwartz this offseason. Depending on how the line performs without those two, Brown could be Kansas City’s top target in free agency.

While he might not supplant Trent Williams as the league’s highest-paid offensive tackle, another Pro Bowl season should put him in the conversation.

Is New York Giants tight end Evan Engram elite? No. However, neither are Jonnu Smith and Hunter Henry, and both were paid well this offseason. In terms of annual salary, only George Kittle and Travis Kelce are making more than the duo.

While Engram is not a playmaker on the level of Kelce and Kittle, one could argue he’s just as valuable as Smith and Henry. He has topped 500 receiving yards in three of his four pro seasons. He only had 467 receiving yards in 2019 but also only appeared in eight games.

Given the rising salaries of tight ends, Engram could be in line for a huge deal next offseason. He could re-sign, though New York added Kyle Rudolph in free agency and might not be eager to overspend on extensions.

“At the end of the day you have to make a cold, hard business decision: Can you afford to devote that much cap space to this particular player? I am very cognizant of the message that it sends out, but you can’t pay everybody,” Giants president and CEO John Mara said of other tough free-agent decisions from recent seasons, which might have a bearing on Engram’s situation, per Zack Rosenblatt of NJ.com.

If he doesn’t return to New York, the Cincinnati Bengals could be an ideal landing spot. The Bengals appear to have their franchise quarterback in Joe Burrow, but they lack a high-end receiving tight end.

Combining Engram with Burrow, Tee Higgins and Tyler Boyd could help give Cincinnati one of the league’s most formidable passing attacks.

Regardless of where Engram lands, he’s likely to get a bigger deal than Smith and Henry. That’s the next-man-up nature of contract negotiations, and he is poised to benefit.

A second-round draft pick of the Indianapolis Colts in 2018, Darius Leonard has emerged as one of the NFL’s best off-ball linebackers. He’s already a two-time first-team All-Pro and a three-time Pro Bowler with 416 tackles, 15.0 sacks, nine forced fumbles and seven interceptions.

It should surprise no one to see Leonard reset the off-ball linebacker market in 2022. Bobby Wagner leads the league among non-pass-rushing linebackers at $18 million annually. Leonard is similarly productive and roughly five years younger than Wagner—Leonard won’t turn 26 until July.

He will be one of the hottest names on the free-agent market if the Colts don’t extend him. A return to Indianapolis feels likely, given the team’s league-best projected cap space for 2022. The Colts have a potential future Hall of Famer in Leonard and little reason to let him walk.

However, a team like Cincinnati could make a serious run if he reaches the market.

The Bengals should be loaded with cap space ($64.2 million) and need a defensive playmaker of Leonard’s caliber. Last season, Cincinnati’s defense ranked 19th against the pass and 29th against the run in terms of yards allowed.

Because of Leonard’s combination of production, Pro Bowl status and youth, he’s likely to land a record-setting long-term contract wherever he lands.

Unlike some players on this list, Chicago Bears receiver Allen Robinson II is not looking for his second long-term contract. He got that from Chicago in 2018, when he signed a three-year, $48 million deal. However, he will blow that pact away if he reaches the open market.

It’s an “if” because Robinson was given the franchise tag this offseason and could ink an extension with Chicago before 2022. The Bears certainly value his presence.

“We tagged him for a reason. He’s a really good player. We’re glad he’s part of our team,” general manager Ryan Pace said, per Alyssa Barbieri of Bears Wire.

If he doesn’t re-sign, he could land with a franchise that lacks a No. 1 receiver. The New York Jets project to have the third-most cap space in 2022 and need such a player.

With the Jets widely expected to select a quarterback with the No. 2 pick in this year’s draft, adding a receiver of Robinson’s caliber could be huge for the youngster’s development.

Expect whichever team signs him to pay much more than the four-year, $72 million deal that Kenny Golladay received this offseason from the Giants. Robinson can be an offensive centerpiece and will still only be 28 years old at the start of next offseason.

The Washington Football Team gave All-Pro guard Brandon Scherff the franchise tag for the second-consecutive offseason in March. This sets up the four-time Pro Bowler to hit the open market at 30 years old next offseason.

Washington could agree on an extension with Scherff before then, but he has little reason to not play on his $18 million guaranteed contract and hit the market next year. If Scherff does reach free agency, he’ll likely become the league’s highest-paid interior offensive lineman.

According to ESPN’s John Keim, Scherff has already turned down an offer to be the highest-paid guard in the NFL.

A return to Washington is possible, but a team like the Los Angeles Chargers could also make a ton of sense. L.A. appears to have its franchise quarterback in Justin Herbert, but it does need help along the offensive line.

Herbert was sacked 32 times in his rookie season. The Chargers then parted with Pro Bowl guard Trai Turner in the offseason.

Really, though, any team looking for guard help should be interested in Scherff. He’s one of the best interior linemen in the game and should have several great years ahead of him. While Scherff is roughly a year-and-a-half older than Thuney, he should eclipse the $16 million in annual salary Thuney is set to earn on his new deal.

T.J. Watt might be the NFL’s best young pass-rusher. He has amassed 49.5 sacks, three Pro Bowl appearances and two first-team All-Pro selections in four years. He has had a ridiculous 120 quarterback pressures over the last two years.

Like many players on this list, Watt could get a contract extension before next offseason. However, it sounds like the Pittsburgh Steelers aren’t opposed to letting Watt play out the final year of his rookie deal.

“T.J. has another year on his contract. We look at him as a key player in our future. I can assure you we’re going to do everything we can to keep him on the roster,” team president Art Rooney II said, per ESPN’s Brooke Pryor.

Given Watt’s production and age—he’ll turn 27 in October—no one should be surprised if he surpasses Joey Bosa as the league’s highest-paid pass-rusher in terms of annual value. The only real question is who will sign the check.

A return to Pittsburgh can’t be ruled out, as the Steelers do want to keep Watt. However, a cap-rich team like the Jets could also be in the mix.

The team lacks a dominant edge-defender. Adding Watt to whichever quarterback is taken second overall in this year’s draft would give New York a cornerstone on each side of the ball.