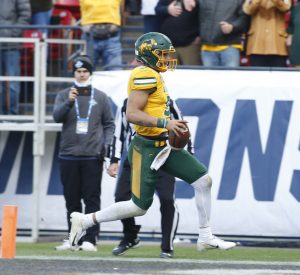 The 2021 NFL Draft is less than two weeks away. As the draft order and projected picks become clearer after recent trades including early draft picks and franchise quarterbacks, it is important to consider possible draft-day scenarios that fans may see play out in late April.

The Jaguars are in the market for a franchise quarterback to grow alongside first-time NFL head coach Urban Meyer. Lawrence is the draft’s top player and passer. The Jaguars’ coaching staff have hinted that the Clemson signal-caller will be the selection.

The Jets recently traded away 2018 third-overall pick Sam Darnold. To replace him, they will select Wilson. The BYU passer had a meteoric rise in 2020 and will work with new head coach Robert Saleh to rebuild the Jets.

The 49ers have been rumored to be interested in several quarterbacks since trading for the third selection of the draft. That said, Fields has a track record worthy of the first overall pick in most years. Head coach Kyle Shanahan and the 49ers staff were present at Ohio State’s April Pro Day to watch Fields throw.

The Falcons will likely look to groom a young passer behind Matt Ryan. Lance is the best quarterback available and could reasonably go earlier than this pick. The North Dakota State product may have the highest ceiling of any signal-caller in this class. He is a promising quarterback for new head coach Arthur Smith to build around.

The Bengals have been widely rumored to be interested in a wide receiver with this pick. Nonetheless, the organization should have seen its future flash before its eyes when franchise passer and 2020 first overall pick Joe Burrow went down with an injury that ended his rookie season. Sewell is the best lineman in the class. He will help keep Burrow on his feet for years to come.

The Dolphins’ rookie quarterback, Tua Tagovailoa, had an up-and-down rookie season. To help his development, Miami must surround him with talented pass-catchers. There is no better receiving threat in this class than Pitts. He is an excellent athlete with the size and speed to win at every level. He is also an underrated blocker.

The biggest hole in the Lions’ depth chart is at wide receiver. The team lacks a true No. 1 option. Waddle is an immediate three-level threat who adds a currently missing speed element to Detroit’s receivers room. He also has excellent hands and is one of the most dangerous receivers in the draft after the catch.

The Panthers famously took only defensive players in the 2020 NFL Draft. With their first pick, they continue that trend. Horn is the best defensive player in this class. While he is a versatile talent, he will thrive in a press-man scheme. Horn answered questions about his athleticism with an incredible performance at his Pro Day.

The Broncos’ linebacker room is full of middling players and expiring contracts. Parsons is an elite athlete with the potential to become a star linebacker in the NFL. While he is a work in progress, his athleticism grants him a serviceable floor.

The Cowboys’ secondary was the team’s biggest weakness in 2020. Surtain is a top-10 player in this class who can start immediately in Dallas. His Pro-Day performance should mitigate concerns surrounding his athleticism. Surtain may be the first cornerback taken come draft day.

The Giants filled some of their biggest needs in free agency. One still-present hole in their depth chart is at linebacker. Owusu-Koramoah is one of the most versatile players in the 2021 class. He will fit in alongside other “position-less” defenders to improve upon an already impressive defense under a creative defensive coordinator.

The Eagles were rumored to have moved back in the draft because they expected their top target to be unavailable at No. 6. In this scenario, that player is still on the board at 12. While Chase is already an impressive receiver with great hands and after-the-catch ability, he is also an excellent athlete who will only improve with NFL coaching.

The Chargers have a glaring need at tackle and Darrisaw is one of the best players available. He should start immediately in Los Angeles. Furthermore, he has guard-tackle versatility.

Versatility and the ability to fill multiple roster spots are valuable traits. Slater legitimately has the potential to start at all five offensive line positions. Minnesota has holes and expiring contracts across its entire offensive line. Slater can help wherever the team needs him.

The Patriots were hindered by a lack of pass-catching talent in 2020. Bateman is arguably the draft’s top receiver. He is an excellent route-runner with consistent hands. What’s more, his 33-inch arms confirm the impressive catch radius present on tape and should allay concerns about his smaller than expected frame at his Pro Day.

The Cardinals were sorely lacking cornerback talent even before long-time starter Patrick Peterson left in free agency. Newsome is one of the draft’s top corners. A scheme versatile option, the Northwestern product is at his best in off-man or zone coverage. Moreover, he has the traits to succeed in press man.

The Raiders need help along the defensive front. In a defensive line class that largely lacks top-end talent, Las Vegas brings in the draft’s top defensive tackle. Barmore is worthy of the 17th selection. He has an extremely high ceiling.

The Dolphins were rumored to have been interested in multiple running backs in free agency. Harris is the draft class’s best running back. Miami, in this scenario, chooses to reunite the Crimson Tide star with quarterback Tua Tagovailoa. Harris has a high-level blend of power, balance, hands and quick feet. He should be an impact player immediately.

Washington needs help at tackle and Cosmi fits both need and value. He is an impressive athlete and should improve with NFL coaching. He can be a high-level starter in the NFL.

The Bears are likely in the market for a quarterback with only Andy Dalton and Nick Foles on the roster. Jones is widely rumored to be taken earlier than pick 20. In this scenario, though, Chicago takes him in the back half of the first round. Jones has starter upside.

The Colts are in desperate need of an immediate contributor at tackle. Jenkins is the most pro-ready option available and meets the value attributed to the 21st pick

The Titans need to add a receiver to complement A.J. Brown. In this scenario, Tennessee lands one of the draft’s top pass-catchers. Smith is an NFL-ready receiver thanks to his athleticism, route running and hands. While concerns about his size are valid, his stellar film indicates he may be an outlier among past small NFL receivers.

The Jets lack proven starters at cornerback. Farley is a hyper-athletic corner with the potential to be a scheme-versatile star in the NFL. He is worth this selection despite his being the subject of various injury concerns.

The Steelers were the team to beat early in the 2020 season. To maintain that level of success, they bring in an NFL-ready center to bolster their offensive line. Humphrey had an excellent career at Oklahoma. He proved himself against high-level competition once again at the Senior Bowl. Furthermore, his impressive Pro-Day numbers should allay concerns about his athleticism.

The Jaguars have a glaring hole on their depth chart at tight end. Freiermuth was widely considered a first-round talent entering the 2020 season. Despite some injury concerns, he is still the second-best tight end in the class. The value for this pick is reasonable; what’s more, there is a notable drop-off at tight end after Freiermuth. Jacksonville fills a need with this pick.

The Browns have a strong overall roster and Collins would be an immediate upgrade at linebacker. He has an excellent combination of size and speed for the position. Moreover, he is one of the top coverage linebackers in the class.

The Ravens choose to bet on this class’s depth at wide receiver and address another need. With its first pick, Baltimore takes the draft’s top pass rusher. Ojulari is an incredibly bendy pass-rush specialist who is also severely underrated in run defense.

The Saints have an unclear future at quarterback for the first time since bringing in Drew Brees in 2006. What’s more, the team has lacked consistent receiving threats outside of Michael Thomas for years. Moore is an excellent athlete and an underrated route-runner. What’s more, he is one of the best receivers in the class after the catch. He should mesh well with either of the quarterbacks most likely to take over in New Orleans.

The Packers have famously never brought in a first-round receiver for future Hall of Famer Aaron Rodgers. In this scenario, that streak is broken. In 2020, Toney proved himself to be more than just a gadget player. He exhibited improved route-running and hands while maintaining his ability after the catch.

The Bills are positioned well as Super Bowl contenders for years to come. One of the few holes on the roster is at cornerback opposite Tre’Davious White. Melifonwu can fill that need and fit well into the Bills’ secondary. Although he will thrive in press-man at the next level, he is fairly versatile after having gained experience in other schemes at Syracuse.

The Chiefs released both of their starting tackles from 2020, Eric Fisher and Mitchell Schwartz. While Kansas City has since brought in unproven second-year player Prince Tega Wanogho to pair with fellow 2020 draft pick Lucas Niang, the organization should add a developmental piece in the scenario that either of those two talented but flawed players does not work out. Brown is one of the most athletic linemen in this class. He has excellent tools and would be best-suited to sit and learn from NFL coaching for one to two years before seeing the field.

The Buccaneers sit at 32 and bring in one of the draft’s top defensive ends. Rousseau has incredible tools and can very realistically develop into a star in the NFL. While he is not NFL-ready, he is athletic enough to eventually fill multiple roles for the Buccaneers.