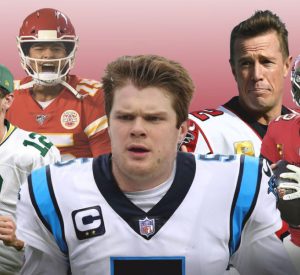 The 2021 NFL Draft begins on April 29 and runs through May 1. Even though the draft has yet to occur, William Hill Sports Book released its projected NFL win totals for all 32 teams for next season.

Williams Hill has released its projected win totals for the 2021 NFL season.

Some of the teams’ win projections may seem a tad high on the surface, but it’s important to remember the NFL expanded its regular season to 17 games. Even with the added contest, there will be plenty of teams that fail to reach their win estimation.

Let’s look at four teams (in no particular order) that are likely to hit the under on their projected 2021 win total.

The Jacksonville Jaguars were successful in “tanking for Trevor” by losing 15 of 16 games last year, which hands them the No. 1 overall pick in the NFL Draft and the ability to grab quarterback Trevor Lawrence.

Trevor Lawrence showing why he’s projected to be the No. 1 pick 😳 @brgridiron

With all that said, the Jaguars have plenty of roster holes and other uncertainties entering 2021. Even if Lawrence leads the Jaguars to competency on offense, what will their defense look like after a pitiful 2020 campaign? After all, the Jaguars yielded the most yards (6,683) and points (492) in their franchise history a season ago.

There’s also the question of how Meyer will perform in the pros. There have plenty of coaches who dominated at the collegiate level but failed to translate that success to the NFL. Meyer, a three-time National Champion, will have his work cut out for him guiding a squad in full-rebuild mode.

The Jaguars’ schedule is far from a cakewalk. In addition to playing in the same division as the Tennessee Titans and Indianapolis Colts—a pair of 2020 playoff clubs—the Jaguars will face the lethal NFC West, which could very well be the best division in the league. Those four games alone—which includes road contests against the Seattle Seahawks and Los Angeles Rams, plus home tilts versus the Arizona Cardinals and San Francisco 49ers—could spell major trouble for Jacksonville.

Furthermore, the Jaguars play host to the star-studded Buffalo Bills. Seven of their 17 games will come against 2020 playoff squads. And that does not include their visit to Gillette Stadium against the New England Patriots—led by head coach Bill Belichick, who is notoriously sensational against opposing rookie quarterbacks.

With a difficult schedule and a subpar roster, six wins seem out of reach for the rebuilding Jaguars.

Oddsmakers have placed the Carolina Panthers’ over/under for wins at 7.5. The Panthers finished 5-11 in 2020. Among NFC clubs, their five victories only exceeded the Philadelphia Eagles (4-11-11) and Atlanta Falcons (4-12). The Panthers are stuck in the NFC South, which features two heavyweight squads—the Super Bowl champion Tampa Bay Buccaneers and the reigning division champion New Orleans Saints.

The optimistic view contends that the Panthers will be better with a healthy Christian McCaffrey back in the fold. Injuries limited the former All-Pro running back to just three games last year.

However, the Panthers’ quarterback play is still a major uncertainty. They traded for Sam Darnold, the former third overall pick of the 2018 NFL Draft. Darnold, who spent his first three seasons with the New York Jets, struggled mightily last year after showing flashes of strong play in his rookie and sophomore campaigns. Darnold threw nine touchdowns against 11 interceptions in 2020 as the Jets won just two games in a nightmare season.

For his career, Darnold holds a record of 13-25 as a starting quarterback. That poor mark is not all on him, as the Jets failed to supply him with adequate talent around him. Darnold will have more playmakers at his disposal—led by McCaffrey and receivers DJ Moore and Robby Anderson—in Carolina, a ray of hope for his chances to revive his career.

The bottom line question remains—is Darnold a major upgrade over Teddy Bridgewater? Bridgewater, who remains under contract with the club for the next two years, is expected to be traded or serve as the backup to Darnold. More than likely, Bridgewater will be playing elsewhere next year after receiving permission to explore a trade from the Panthers.

Following the trade for Sam Darnold, the #Panthers spoke with QB Teddy Bridgewater and allowed him the opportunity to talk with teams to potentially facilitate a trade, sources say. Carolina is open to Bridgewater returning, but will give him a chance to have a say in his future.

Bridgewater underachieved after inking a three-year, $63 million last offseason by throwing 15 touchdowns with 11 interceptions to go along with five rushing scores with three lost fumbles. He went 4-11 as a starter.

Bridgewater played poorly last year, but Darnold was even worse (albeit with fewer weapons to work with). If the quarterback play does not improve, can the Panthers really win eight or more games?  Outside of adding linebacker Haason Reddick, the Panthers did little in free agency to augment their defense, which ranked middle-of-the-pack in just about every metric, including scoring defense (25.1 points per game allowed).

The offensive line has plenty of question marks too, even after retaining right tackle Taylor Moton.

Look for the Panthers to fall just shy of the 7.5 projection and finish with either 6 or 7 wins.

Sam Darnold’s old squad is expected to take a leap forward in 2021, at least according to the oddsmakers. After finishing a franchise-worst 2-14 in 2020, the New York Jets’ over/under is set at 6 by William Hill Sports Book.

The Jets are led by first-year head coach Robert Saleh, who served as the San Francisco 49ers defensive coordinator for the past four seasons. San Francisco reached the Super Bowl on the strength of its defense in 2019.

Wide receiver Corey Davis and defensive end Carl Lawson joined the Jets via free agency. Lawson had a career year with the Cincinnati Bengals in 2020, finishing with the second-most quarterback hits (32) and the fourth-most pressures (64) in the NFL.

After trading Darnold, the Jets are almost certainly selecting a quarterback with the second overall pick. They are expected to draft BYU’s Zach Wilson.

But what else will they be doing in the first two days? Here’s my latest JETS 3-Round Mock Draft (version 7.0) … https://t.co/TP1Nlugck8 pic.twitter.com/lXhORobZfA

While Wilson looks NFL-ready, rookie quarterbacks are susceptible to growing pains. Even with the addition of Davis, there’s not enough talent offensively to counterbalance the inevitable ups and downs of a first-year signal-caller.

The Jets improve next season, but still collect only four or five wins in 2021.

While the Atlanta Falcons made a quality hire in head coach Arthur Smith, a leap to 7+ victories seems like a stretch after the club went 4-12 in 2020. The Falcons have finished under .500 in each of the past three seasons.

Atlanta has some major holes on its roster, mainly on defense. The Falcons need an edge rusher to complement defensive tackle Grady Jarrett. An even more pressing need, the Falcons must improve their league-worst secondary. Atlanta finished last in the league in passing defense, allowing a league-high 293.6 yards through the air in 2020.

The crew breaks down the biggest question marks in the NFC South. pic.twitter.com/HpnJ36zhvs

Unable to add a star cornerback or safety in free agency, the Falcons better address their glaring deficiencies in the secondary in the draft. They will also have to find a replacement for aging quarterback Matt Ryan, who is no longer an elite option under center. Ryan is likely to be the starter in 2021, but beyond that, it’s anyone’s guess as to who the Falcons’ signal-caller will be.

Just like the Panthers, the Falcons are saddled in the NFC South. The Bucs and Saints are both more than capable of sweeping the Falcons, as they did last year. The Falcons could very well finish in the basement in the division for the second straight season.