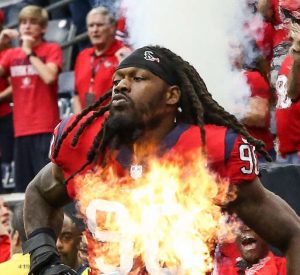 NFL owners will vote on a series of rules and bylaw proposals Wednesday, some designed to overhaul the way overtime would be played, others aimed at closing rulebook loopholes, and one attempting to change the postseason interview and hiring windows for head coaches and coordinators.

© Troy Taormina, USA TODAY Sports
A new number could be straight fire for Jadeveon Clowney, who wore No. 90 for the Texans.


But the Kansas City Chiefs might have proffered the most fanciful suggestion, requesting the league loosen its uniform numbering restrictions, purportedly to increase “flexibility in assigning jersey numbers.”

The Chiefs proposed the following expansion of jersey numbers available to players:

► Defensive backs would be able to wear 1 through 49 (currently eligible for 20 through 49).

► Offensive linemen would be able to wear 50 through 79 (currently, only centers can use 50 through 59).

MOCK DRAFT: What might happen in first round if Cowboys, Broncos trade up?

Such an adjustment would definitely take some getting used to for NFL viewers, yet would certainly pique the interest of players and allow for some to carry over familiar digits from college.

“I want to see single-digit wide receiver numbers,” former Bengals and Browns wideout and current NFL Network analyst Andrew Hawkins, who wore 2 at Toledo and 0 in the CFL, said.

The possibilities for switches are tantalizing – assuming 75% (at least 24) of the owners vote for the measure, and the league allows for established veterans to instantly change, which can traditionally be problematic depending on jersey inventory for a specific player.

But here are 16 notable figures who might consider changing if the opportunity arises:

Gonna be a few former LSU stars on this list, but he’s preeminent among them. Peterson is back in gold and purple, beginning the next phase of his career in Minnesota after wearing No. 21 for a decade in Arizona. Be pretty cool to see him brandish the No. 7 he starred in while at Baton Rouge anew.

Sticking with the Vikes/LSU theme, the 2020 offensive rookie of the year runner-up would definitely look sharper in the No. 2 he wore for the Bayou Bengals than the No. 18 he wore during his rookie year for Minnesota.

The latest (and only eighth ever) player to rush for 2,000 yards in a season, he was No. 2 for Alabama in 2015 when he won the Heisman Trophy and still uses “@KingHenry_2” as his Twitter handle. Why not drop one deuce from his current No. 22 Tennessee jersey?

Single digits cool & all , but can we bring the throwback jerseys & helmets back ? Somebody put in a request for that lol .

Awesome as he is, kinda hard to get excited about a No. 41 jersey, no? Here’s suggesting Kamara go back to the No. 6 he had at the University of Tennessee … or maybe even better, go with No. 5 as a tribute to former New Orleans RB Reggie Bush, who badly wanted to wear his college number in the NFL but was only allowed to do so in practice.

Who will ever forget him blowing up Michigan’s Vincent Smith in the Outback Bowl while wearing No. 7 for South Carolina? The top pick of the 2014 NFL draft, Clowney has had a solid, if not exceptional, NFL career but is about to embark on a new chapter in Cleveland. Good a time as any to lift No. 7 from Browns P Jamie Gillan … though Clowney must ensure his new team also lists him at *linebacker – a position he’s played during his career – to take advantage of the prospective change.

He won a title in the first College Football Playoff championship game while wrapped in No. 15 for Ohio State. He’s enjoyed one playoff victory in five seasons with Dallas while wearing Deion Sanders’ No. 21. Switch, Zeke.

Probably the most-hyped draft prospect this year who doesn’t play quarterback, Pitts donned No. 84 for the Florida Gators. But how cool would a 6-6, 246-pounder who can fly look in, say, No. 1 while screaming down the seam on an NFL field?

He’s been routinely battling injuries going back to his Florida State days, when he was the Seminoles’ No. 3 and had two impactful campaigns in Tallahassee. No. 33 for the Bolts, James was an All-Pro as a rookie in 2018 but has appeared in only five games since. Maybe his debut in the Chargers’ glorious new uniforms should entail wearing just one 3.

Got be April fools Joke lol 😂

He racked up nearly 4,200 total yards during his final two seasons at Florida State in No. 4. Might he wear it as well as Brett Favre briefly did in Minnesota?

Probably the premier corner in the league right now, he’s already zeroing in on No. 2 after five NFL seasons in 20. Ramsey was outfitted in No. 8 at FSU, though that’s where his buddy Sanders made being a lockdown DB fashionable when he sported No. 2 before the NFL necessitated his switch to 21, which he enthusiastically branded as his own.

Like Mario Williams before him, he flashed in No. 9 while at North Carolina State. How cool would it be to see a 6-4, 275-pound Pro Bowl pass rusher bearing down on quarterbacks dressed in No. 9 in the NFL?

Formerly No. 11 at Clemson, he was billed as a defensive super weapon entering the 2020 draft, where he came off the board eighth overall. After a largely disappointing rookie season in uninspiring No. 48, maybe Simmons goes to No. 8 … since he ain’t gonna get ahold of the No. 11 Larry Fitzgerald already bronzed in the desert.

Since being forced to shed the No. 7 he also rocked so well at LSU, he’s generally been mere mortal in the NFL while saddled with 27 in Jacksonville and 28 in Tampa Bay. Surely, if given another chance to take the field in 7, Fournette could give the jersey a greater legacy than former Bucs K Martin Gramatica.

A two-time All-Pro in Indianapolis, he’s done No. 53 proud. But we know this about Leonard: he’s fiercely proud of reaching the NFL by way of a Historically Black College and University, and he was quite the baller while featured in No. 10 for South Carolina State. Given the opportunity to go back to that number, why wouldn’t he?

His NFL career is off to a spectacular start in No. 99, Young named 2020’s defensive rookie of the year after collecting 7½ sacks. But you will recall that he became the “Predator” at Ohio State while wearing No. 2, was drafted second overall and goes by “CY2” on Twitter. The only thing Young needs to handle is getting his position switched to *outside linebacker as he’d remain ineligible for No. 2, even if owners pass the jersey proposal, if classified as a defensive end.

And finally … D-Jax was a star in No. 1 while playing collegiately at Cal and has often worn the number in practice settings during his 13-year NFL career. He’s winding it down in his hometown of Los Angeles, and it wouldn’t it be cool to see him conclude his sterling career in the same number in which he became a Pac-10 (at the time) star?