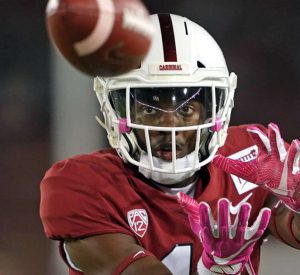 Far and away, left tackle and defensive end are the biggest needs for the Colts.

Start the day smarter. Get all the news you need in your inbox each morning.

“I feel confident the way Chris (Ballard) goes about it, that there can be an edge rusher and a left tackle and even a corner that’s impactful, no question,” Irsay said. “Mostly through the draft.”

The Colts waited out the free agent process for Xavier Rhodes and T.J. Carrie, then brought both veterans back on one-year deals. By getting Rhodes and Carrie back, Indianapolis returns all but seven of the defensive snaps played at the position last year, and the Colts still like the potential of 2019 rookie Marvell Tell, who opted out of 2020 due to the COVID-19 pandemic but will be back this season.

Defensive ends: Who will likely be available for Colts on first two days of NFL draft

A case could be made that Indianapolis can afford to wait, see how Rock Ya-Sin, Tell and Isaiah Rodgers develop, evaluate how much Rhodes and Carrie have left and then make a move for an impact cornerback next offseason.

But that isn’t the way Ballard has operated at positions of apparent depth.

Under Ballard, the Colts often keep an eye on the future beyond the immediate season in front of them, and the strategy has led to picks like Bobby Okereke, Jonathan Taylor and Julian Blackmon on the second day of the draft over the past two seasons. Indianapolis snapped up all three players despite depth at their positions, and the moves have paid off in a big way so far.


Uncertainty lurks at corner for the Colts beyond the 2021 season.

Kenny Moore remains brilliant, a building block in a critical defensive spot who is under contract for the next three seasons. Beyond Moore, the future gets cloudy. Rhodes and Carrie are playing on one-year deals on the wrong side of 30. Ya-Sin has been an uneven starter through his first two seasons, albeit a starter the Colts believe will get better. Tell and Rodgers remain unproven.

Whether or not Ya-Sin fully realizes his potential, the Colts could use a young, talented cornerback on the outside to team with Moore, Blackmon and Khari Willis for the foreseeable future.

The good news is this might be the draft to find one.

Draft analysts believe that cornerback is one of this draft’s deepest positions, the sort of class where teams will be able to find starting-caliber cornerbacks deep into the third round of the draft, and outside of Alabama’s Patrick Surtain and South Carolina’s Jaycee Horn, just about all of them have a chance to be available when the Colts go on the clock for the first time at No. 21.

With that in mind, and Ballard’s history of picking tall, long-limbed cornerbacks — a guy like Washington’s Elijah Molden is a long shot because he measured at 5-9, under the Colts’ 5-10 benchmark — here’s a look at the players that might be available at No. 21, No. 54 or whatever picks the Colts end up holding after Ballard trades down in order to get more selections.

Reasons why the Colts might pick him: Farley is remarkably gifted, a 6-1 cornerback with long arms who might have been able to play his way into the top half of the first round if he hadn’t opted out of the 2020 season. Beyond the physical gifts, Farley has good ball skills (six interceptions in two years) and is incredibly physical, a trait the Colts value in cornerbacks.

Reasons why the Colts might not: Health has been an issue for Farley. The big cornerback tore his ACL as a freshman in 2017, missed the final games due to a back injury in 2019 and then underwent a microdiscectomy in March that kept him from doing any pre-draft testing, and back injuries can sometimes be hard to put behind a player.

Reasons why: Newsome, who played in Pat Fitzgerald’s complex scheme in college, has a knack for getting his hands on the ball, piling up 25 pass deflections in 21 college games, and he’s incredibly explosive, running the 40-yard dash in 4.38 seconds at his Pro Day.

Reasons why not: Health. Again. Newsome missed at least three games in all three of his seasons in Evansville, and availability is an important part of any draft evaluation. Newsome also just had one collegiate interception despite all the passes defended; the Colts highly value turnovers and would love to find a cornerback who consistently takes the ball away.

Reasons why: Stokes is the fastest cornerback in the draft, timed at 4.29 seconds in the 40, and he has good ball skills, picking off four passes in 2020 while playing against the talented receivers of the SEC.

Reasons why not: Known for being physical in coverage, Stokes could have some of the same issues Ya-Sin has faced in making the transition to the NFL, which severely limits the contact a defensive back can make with a receiver in coverage.

Reasons why: Another famous name in a class full of NFL pedigrees, Samuel has his father’s instincts, and he’s got the quick feet and straight-line speed to stick with receivers, as well as plenty of experience, making 23 starts over three seasons in Tallahassee. Known as a battler, he has a reputation like Moore, of playing bigger than his listed size.

Reasons why not: Samuel Jr. just barely clears Ballard’s height standard for cornerbacks, checking in at 5-10⅛, and he weighs just 180 pounds. At that size, Samuel might be better suited in the slot in Indianapolis, but that’s the one spot locked up for the foreseeable future.

Reasons why: A Senior Bowl participant, Melifonwu has remarkable size at 6-2, 205 pounds, and he has impressive explosive abilities, offering the sort of size/movement skills the Colts liked so much about Rhodes. Melifonwu also had 26 passes defended in 29 college games.

Reasons why not: Melifonwu is something of a raw prospect, and the transition from collegiate cornerback to the NFL is not easy, particularly in terms of the physicality allowed in coverage.

Reasons why: Campbell, like his running mate, Stokes, is a physical freak of nature, running the 40 in 4.36 seconds despite standing 6-1, and he’s got all the tools an NFL team could want to match up with tall receivers down the field. Like a lot of Bulldog defenders, Campbell’s a good tackler, willing to mix it up in the run game.

Reasons why not: Ball production was largely missing from Campbell’s college career. Despite playing in 33 games over three seasons, Campbell had just 11 total passes defended and one career interception, an issue in a Colts defense that values turnover production.

Reasons why: Fast and competitive, Joseph made four interceptions for the Wildcats in 2020, and he’s a remarkable athlete at the position.

Reasons why not: Joseph was suspended for a violation of team rules at LSU, transferred and then counseled by Kentucky coaches to opt out of the final two games of the season, citing a lack of effort and desire as the season wound to a close.

Reasons why: Adebo gets his hands on the football. A lot. In two seasons as a starter at Stanford, Adebo racked up eight interceptions and 38 passes defended in just 22 career games, better numbers than any other cornerback in the class, and he’s a willing tackler who piled up 97 tackles in those two seasons.

Reasons why not: Adebo opted out of the 2020 season, leaving the tape evaluation incomplete, and his habit of going after the football can sometimes leave him vulnerable.

Reasons why: Another Senior Bowl participant — the Colts have historically liked pulling players out of Mobile — Robinson is versatile enough to play outside and in the slot, and he’s an experienced player with a lot of starts under his belt.

Reasons why not: Robinson suffered a severe concussion in 2018, and beyond that, although his 5-11 height is above the Colts’ cornerback benchmark, he is lean at just 186 pounds and has relatively short arms, limiting his length.

Reasons why: The small-school cornerback, another Senior Bowl guy, has a nose for the football (10 interceptions, 38 pass breakups in 42 games) and a good combination of height and speed, plus the long arms the Colts typically covet all over their defense.

Reasons why not: Because he played at the FCS level, Rochell hasn’t faced the same caliber of wide receivers as other players on this list, and he’s something of a raw prospect who might take some time to develop.

This article originally appeared on Indianapolis Star: Which cornerbacks will likely be available for Colts on the first two days of NFL draft