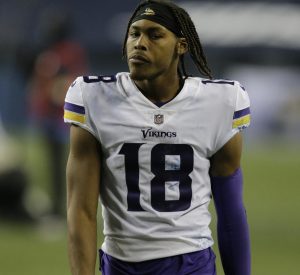 Minnesota Vikings wide receiver Justin Jefferson is happy with how things ended up despite the fact that there was plenty of belief that the Philadelphia Eagles would select him in the first round of the 2020 NFL draft.

The Eagles were in clear need of a wideout when they went on the clock with the No. 21 overall pick in the 2020 NFL draft, and while they did take a receiver, it wasn’t Jefferson.

Philly instead selected TCU’s Jalen Reagor, allowing the Vikings to nab Jefferson with the next pick at No. 22 overall.

In an interview with Tyler R. Tynes of GQ published on Wednesday, Jefferson discussed the circumstances leading up to the Vikings drafting him and why he is pleased to be in Minnesota rather than Philadelphia:

“Leading up to the draft, you know, they had all of those mock drafts and people sharing their opinions on who is going to go where. A lot of people had me going to Philly. And, I thought I was going to Philly. Honestly. The funny part is, Philly was on the board and then Minnesota called me. At first, I thought it was Philly. But, I answered the phone and it was Minnesota. It’s crazy how all of that happened and everything. But, I’m definitely, definitely, definitely excited that I’m on the Vikings rather than Philly.”

Jefferson went on to enjoy one of the greatest seasons by a rookie wide receiver in NFL history with the Vikings, as he racked up 88 receptions for 1,400 yards and seven touchdowns en route to being named a Pro Bowler.

That helped ease any sting Vikings fans may have felt from seeing Stefon Diggs go off for 127 catches, 1,535 yards and eight touchdowns in an All-Pro year for the Buffalo Bills after getting traded there from Minnesota.

The sting resided with Eagles fans instead, as Reagor was limited to 11 games as a rookie because of injuries and finished with just 31 receptions for 396 yards and one touchdown.

It remains possible that Reagor could develop into a stud if he can stay healthy moving forward, but it is undoubtedly a question mark, whereas Jefferson is already one of the NFL’s best receivers one year in.

Passing on Jefferson is looking like a major loss on the Eagles’ part, but Philadelphia’s decision was a win for Jefferson in his eyes.