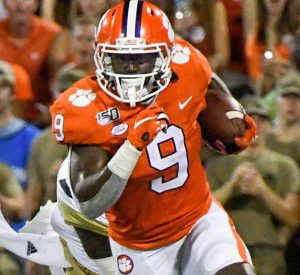 If you’re subscribed to a Fantasy Football newsletter, you don’t really need me to tell you how important running backs are. Whether you think you should target them early or you’re a Zero-RB truther, or whether you’re playing in a re-draft league or Dynasty, running backs will probably be central to your team-building strategy in 2021 and beyond.

The running back position is in a pretty interesting spot heading into 2021, with, by my count, 22 running backs you should feel pretty great about starting before we even see the incoming rookie class. That number could rise depending on which teams do or don’t make a significant addition at the position in the draft, with Myles Gaskin, Mike Davis, Benny Snell, Raheem Mostert, and David Johnson among the backs who could see their outlooks shift considerably depending on what their teams decide to do.

And, obviously, the rookie class will make an impact on the player pool, too. This is why you need to get to know the key names at the position. Rookie running backs aren’t always dominant from Day 1, but as we saw last season, they can be key contributors to a Fantasy title run.

Will this year’s class be as good as last year was? That remains to be seen, but it’ll be exciting to see them try. Here are the top prospects for the 2021 NFL Draft, with write-ups from Dave Richard on the best of the bunch:

Thanks for signing up!

Keep an eye on your inbox.

There was an error processing your subscription.

Betting on Alabama running backs has been a pretty good decision lately, and Harris is the next in line. He emerged as a co-lead in 2019 and then carried the load in 2020, rushing for 1,466 yards and adding 425 through the a with a whopping 30 touchdowns. Harris has been productive throughout his career in every facet of the game and has emerged as the top prospect in this class since the start of his senior season. Here’s what Dave thinks of Harris:

Falcons, Steelers — “Many will compare Harris to fellow former Alabama running back Derrick Henry because of his physical running style. It’s Henry who helped make Arthur Smith a prolific play caller and thusly the head coach of the Falcons. Harris could become Smith’s new version of Henry, albeit in an offense with a richer passing game than Tennessee’s, plus the offensive line is close to being good. Harris would rack up some serious numbers with this version of the Falcons.”

“Harris should become a great three-down player, but running backs like him tend to incur injuries at a higher rate than others. He will also be 23 years old when he comes into the NFL with 530 touches over his past two seasons. He’s expected to play at a high level, but for how long? That’s really the biggest issue because he’s otherwise a very polished, NFL-ready feature back who should be in line for a minimum of 15 touches from Week 1 on. Harris is in consideration for the 1.01 selection in every rookie-only draft and won’t be there by 1.06.”

“Big, strong frame with thick thighs … Excelled in both zone and power blocking schemes … Very good athletic instincts that manifested in jump cuts, blistering spin moves, hurdles and stiff-arms. This tool kit of moves helped him pick up extra yardage often … Good acceleration and suddenness, especially for a 230-pound runner … A natural at bringing in receptions. Also good at adjusting to off-target throws.”

“Had 460 carries and 70 catches across 26 games in 2019-20. Also will be 23 years old when entering the league … Seemed to run to contact often. Needs to learn to hop out of bounds to preserve his body … created yards through power and agility, not speed. Top speed is solid but will get caught from behind … Pass protection needs significant work.”

Etienne took a bit of a step back as a rusher in his senior season, finishing with 914 yards on the ground after topping 1,600 in each of his previous two seasons. Of course, he had already proven pretty much everything he needed to as a runner, and then came out as an even more productive pass catcher in 2020, hauling in 48 passes for 588 yards in just 12 games. Despite playing four full, incredibly productive seasons, Etienne won’t turn 23 until after his rookie season, and he’s got the kind of skill set that could make him a must-start Fantasy RB even if he isn’t a lead back from Day One. Here’s what Dave has to say about Etienne:

Falcons, Dolphins, Steelers, 49ers — “Etienne isn’t a bruiser like Arthur Smith’s last running back, but Smith values versatility and promises to adapt to his players’ talents. To that end, trusting Smith to deploy Etienne properly and frequently in his scheme would be easy for Fantasy managers to do. Matt Ryan doesn’t have a track record of ignoring his running backs out of the backfield, and the Falcons receivers would keep safeties from focusing on Etienne. A lack of competition for playing time is a tiebreaker over other possible destinations.”

“Fast and lean running backs like Etienne don’t always pan out. Sometimes they take on too many injuries and fade (Cadillac Williams, David Wilson), sometimes they become studs for a few seasons (Jamaal Charles, C.J. Spiller), and sometimes they turn into superstars (Alvin Kamara). Etienne’s ability to stay healthy through four years at Clemson is a good thing, but it’ll come down to which team drafts him and how he’ll be utilized that makes or breaks his Fantasy value. If a team sees him as the next Kamara, he should be in position to help Fantasy managers for at least four seasons. Short of that, Etienne will carry some bust potential that might scare some people off. Figure him to get picked anywhere from first to sixth overall in rookie-only drafts.”

“Thick thighs as part of a strong lower body … Lined up primarily in offset pistol but would also play outside, slot and in-motion pre-snap … Very good speed and agility. Etienne’s acceleration and burst are nearly instantaneous … Did a good job breaking away from tackles at his legs, creating yards after contact … Very good pass-catching skills. Natural hands used to reel in receptions and smooth.”

“While his lower body is strong, his upper body was wiry … Frequently was stopped in his tracks once a defender got a body on him above the waist … Below-average pass protector, both in terms of ability and experience … four fumbles in 2020 (one every 54 touches) hints at a possible problem.”

Williams was converted to running back as a senior in high school and he isn’t even 21 years old yet, so there might be more room for him to grow as a player than anyone else at the position. Of course, not that he needs to grow much — he scored 22 touchdowns last season while serving as the 1a option in UNC’s backfield duo last season. With a well-rounded skillset suited for success in today’s NFL, Williams could be the kind of rookie RB who makes an impact right away. Here’s what Dave Richard has to say about Williams:

Steelers, Falcons, Broncos — “Like Atlanta, Pittsburgh is a great destination for any good rookie running back. Williams’ pass protection work in college lends hope for him to adapt at the pro level quickly, which would in turn, make him a three-down candidate for the Steelers. Mike Tomlin has gravitated toward workhorse backs in the past and could very easily do so again with someone like Williams.”

“If Harris is the best pound-for-pound and three-down back this year, Williams is right behind him. But there’s a benefit to Williams that not even Harris can touch: He will have just turned 21 when he gets drafted. Harris, by comparison, is already 23 years old, and a full 25 months older than Williams. It’s a given that the landing spot and the other running backs on the roster will play a huge factor for Williams’ long-term Fantasy value, but if he ends up in a great spot compared to Harris, it’ll be impossible to ignore the younger back with the better path to dominant touches. Williams has dark horse 1.01 appeal in rookie-only drafts and will be a top six-or-seven pick even if he ends up in an unideal situation to begin his career.  ”

“Built like a linebacker, because he used to be one. Added 15 pounds of muscle over two seasons. Thick, compact body complete with strong legs … Handled the physical rigors of running back — didn’t miss a game in college due to injury … Understood zone and power blocking schemes. Played in various formations and should be able to grasp any offensive system … Usually showed good hands. Adjusted to poorly thrown balls well. Fluid movement to run upfield after making the grab … Very good route runner when he ran out of the backfield.”

“Wasn’t a full-time back at UNC … Only five career games with 20-plus touches … Would get caught from behind frequently … Three drops on 27 catchable targets, per Pro Football Focus.”

We break down how do we rank the top three WRs based on Ryan Wilson’s latest mock NFL draft on the Fantasy Football Today in 5 podcast. Listen below and follow at Apple, Spotify or wherever you get your podcasts:

The other half of that UNC backfield, Carter is the less well-regarded of the two, but there still seems to be some gap between him and the rest of the class — he might be in a tier of his own around the third-round range. He never had more than 177 carries or 25 receptions in a season, so teams may have trouble viewing him as an every-down back. However, he was the more explosive playmaker in the UNC backfield, and could slot in immediately as a regular contributor in many offenses. Here’s Dave’s breakdown:

Broncos, Jets, Cardinals, Texans — “Not many teams will view Carter as an every-down back, so it’ll take a team that desperately needs a “lightning” component for its run game to make Carter attractive for Fantasy. The Broncos can offer exactly that. Carter could theoretically be Denver’s “1B” option to Melvin Gordon’s “1A” and, with a strong rookie season, could contend for the lead role as soon as 2022.”

“Carter’s a good back who’s going to have to catch some breaks to become a workhorse in the NFL. He’s a shifty, compact runner, but he doesn’t have the blazing speed, consistent power or pass protection chops to lead a backfield. Not at this point anyway. It wedges him into a complementary role that, in the right offense, could mean anywhere from 10-15 touches per week. He could evolve from there, but he could also struggle to keep that workload. In a rookie class with several great running backs and even more great receivers, Carter should fall to the end of Round 1 if not early Round 2 in rookie-only drafts.”

“Short, stocky build challenged defenders not only to wrap him up but also locate him behind his offensive linemen … Displayed excellent patience in following his blockers in both zone and power schemes … Terrific focus and fearlessness … Don’t mistake his size for his toughness. Carter was never afraid to run with a physical edge … Mostly good hands in the passing game. One drop all of 2020. Naturally turned upfield after the catch and was effective in space.”

“Hand size is 8 3/4, which is considered very small  … Carter isn’t a big target, but his power was non-existent when defenders hit him high. When defenders wrapped him above the waist, the play was over … Speed was never electric — would get caught from behind by faster defenders in the ACC  … Didn’t see him run a variety of routes and might be best as a flare/screen/dumpoff option in the passing game .”

Other names to know