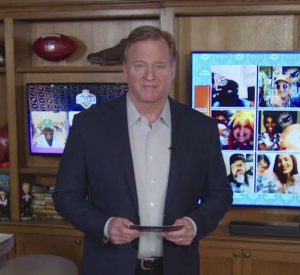 If the 2020 NFL Draft was about innovation and a can-do attitude, the 2021 NFL Draft will be about a return to normalcy.

© Provided by The Boston Globe
Unlike last year when Roger Goodell conducted the NFL Draft from his home in Bronxville, N.Y., the commissioner will be at the center of activities this week in Cleveland.


Running Thursday to Saturday night in Cleveland, this year’s draft will look familiar. Commissioner Roger Goodell will be back on stage, announcing picks from the podium instead of his basement like last year. There will be 13 prospects on hand to walk across the stage, embrace Goodell, and hold up their new jerseys. Their families and friends will be with them backstage. And the NFL Draft Village is back, with up to 50,000 fans per day roaming between several outdoor venues in downtown Cleveland.

But it won’t be like 2019 all over again. Masks will be mandatory for all fans in attendance. And some elements of last year’s all-virtual draft will return. As of Friday, 45 prospects were scheduled to join the broadcast virtually. The NFL will also host a draftathon throughout the three days to raise money and awareness for pandemic recovery.

“We learned so much from what we did at the Super Bowl, where we did a free outdoor experience with limited capacity,” said Peter O’Reilly, the NFL’s executive vice president of special events. “We have every confidence in our protocols that are in place. They’re the ones that got us through this season on the field and with the ability to host more than 1 million fans.”

Here’s a look at what else to expect from this week’s draft:

· The teams in the best draft position:

· The teams in the worst position:

Rams: picks 57, 88, 103, and three late-rounders (barring a trade, the Rams won’t draft in the first round for the fifth straight year);

· Quarterbacks Mac Jones, Trey Lance, and Zach Wilson will be present in Cleveland, but Trevor Lawrence and Justin Fields will not.

· To allow the players to bring family and friends to the draft, the NFL constructed a “living room” for each player that will allow them to celebrate together but stay away from the crowds.

· The NFL will allow players to hug Goodell on the draft stage, if they so choose. An NFL spokesman said Friday that Goodell has been vaccinated.

· The NFL will also dedicate a standing room just outside of the draft theater as a “vaccinated fan zone” for up to 5,000 people, who will be wearing masks. “It points to the platform we have to really advocate for the importance of vaccines,” O’Reilly said.

· Get ready for a long night on Thursday. Last year’s first round took 3 hours 54 minutes, and in 2019 it took 3:39. Teams get 10 minutes to make a pick in the first round; seven minutes in the second round; five minutes for Rounds 3-6; and four minutes for Round 7.

· This year marks one of the smallest draft pools ever. As pointed out by Kalyn Kahler of Defector, about 650 draft-eligible players have signed with an agent, compared with more than 1,800 the previous two years. It seems that many players returned to school for 2021 rather than risk going undrafted. “Everybody that I talk to around the league just says, ‘We don’t know what the heck we’re going to do with our sixth- and seventh-round picks,’ ” NFL Network draft expert Daniel Jeremiah said. “You’ll see teams I think be aggressive in Rounds 2 and 3, and they’ll be parting with these Day 3 picks like nothing.”

· The massive draft guide from The Athletic’s Dane Brugler (named “The Beast”) has some interesting factoids:

Fields was a standout shortstop and leadoff hitter in high school;

Jones modeled as a kid, and his father (Gordon Jones) was the 1977 NAIA men’s tennis singles champion at Flagler College;

Virginia Tech running back Khalil Herbert was born with 12 fingers and 11 toes;

Arkansas running back Rakeem Boyd played at Independence Community College and was featured on the Netflix documentary “Last Chance U”;

LSU receiver Terrace Marshall Jr. is the great-nephew of Joe Delaney, the 1981 rookie Pro Bowler for the Chiefs who died in 1983 while attempting to rescue three kids from drowning;

Clemson receiver Amari Rodgers is the son of Tee Martin, one of the six quarterbacks chosen ahead of Tom Brady in 2000;

Iowa receiver Ihmir Smith-Marsette is a cousin of Queen Latifah.

Belichick sure to be busy

And now for a few draft notes on the Patriots, with a hat tip to the Patriots’ PR team for its research:

· One certainty for the Patriots this weekend: Bill Belichick will be lighting up the phones. He has executed a trade in 21 of his 22 drafts with the Patriots, with 2004 the exception. He has traded up 27 times, traded down 28 times, and 27 times traded picks for a player or a future pick.

· Belichick has traded up in the second round in three straight years, to draft Josh Uche, Joejuan Williams, and Duke Dawson.

· The Patriots have the 15th pick, and only two quarterbacks have been drafted at that spot: Tony Eason by the Patriots in 1983 and Dwayne Haskins by Washington in 2019. Not the best omen.

· Former Patriot Rob Ninkovich told me two weeks ago that the Patriots will “definitely” draft a quarterback, and he expects it to be one with running ability. He wouldn’t be surprised if the Patriots have some two-quarterback packages this year, similar to what the Saints did with Drew Brees and Taysom Hill.

A number of reasons for uniform flap

A seemingly minor rule change for 2021 that allows players to wear different jersey numbers ended up being the most fascinating story of the week, on two fronts.

The first was the surprisingly visceral reaction from Tom Brady over the change, which he lamented as “dumb” on social media. The new rule allows all offensive skill players, plus defensive backs and linebackers, to wear numbers 1-49.

Brady apparently isn’t the only one with this reaction, either. Per Pro Football Talk, Bill Belichick is very much against the new jersey rule, and the Patriots were one of a handful of teams that voted against the proposal.

While Brady’s gripes seem trivial, I understand where he’s coming from. Identifying players at certain positions now gets tougher, and this adds work to his preparation. He’ll probably have to spend half of his week studying a team’s roster just to familiarize himself with jersey numbers.

Brady relies on instincts to make split-second decisions, and for 21 years he has seen defensive linemen wearing 90s, linebackers wearing 50s, and defensive backs wearing 20s and 30s. Now if he sees a player wearing No. 6, it could cause him to stop and pause for half a beat, which could wreck a play or get him hit.

The other fascinating angle was the revelation of a little-known NFL rule that requires players to purchase the excess inventory of all of their jerseys ― at retail price ― if they decide to change numbers. The rule states that a player doesn’t have to pay for his jerseys if he informs the league that he intends to change his number in two years.

A spokesman from Fanatics didn’t respond for a request to comment, but Vikings running back Dalvin Cook decided against switching his jersey number when he discovered it would cost him about $1.5 million, per PFT.

I would venture that the average NFL player probably doesn’t have too many unsold jerseys lying around the team shops. But for quarterbacks, receivers, running backs, and other star players, switching jersey numbers is no cheap proposition. It also means that this year’s rookie crop should be able to snatch up the single numbers.

I have no dog in the fight between the NFL and NFL Players Association over offseason workouts. The NFLPA wants the voluntary workouts to be all-virtual, the teams want five weeks of virtual and four weeks of in-person, and it’s no sweat for me how it gets resolved.

However, offseason workouts are pad-less and contact-less and, as pointed out by the NFL, only eight concussions happened in spring workouts in 2019. Concussions went down last year because equipment is getting better, rules are safer, and tackling technique is improving, not because four weeks of non-contact practices were canceled.

And the 23 percent decrease in missed time probably had something to do with the cancellation of preseason games and the reduction of preseason practices. The NFL countered that lower-extremity strains (hamstring pulls, etc.) increased by 30 percent during the regular season, and ACL tears were the highest in at least five years.

It’s one thing if NFL players weren’t doing anything this time of year. But they’re working out on their own and getting ready for the season. It’s not safer — the veteran leaders of the PA just want to train on their own time and pace, without having to deal with coaches or worry about a younger player taking their spot. They’re just using player safety (and COVID-19) as a cover.

Meanwhile, don’t expect Patriots captain Matthew Slater to be one of the players skipping offseason workouts (which don’t have an on-field component until May 17). Slater, now in his 14th year, lamented that he wasn’t able to bond with his teammates last year.

“When you talk about football and what’s special about it, it’s the brotherhood that exists in the locker room, the relationships in place,” Slater told me recently. “I’m hopeful that this year we’ll have a chance to build on some of those relationships before July and really put a foundation in place to have success.”

Many apologies to Dolphins defensive tackle Christian Wilkins, Falcons guard Chris Lindstrom, and their friends and families. In a profile this past week of Grafton native Ifeatu Melifonwu, I wrote that he has the chance to be the first Massachusetts-born player to be drafted in the first round since Marc Colombo in 2002. Of course, I neglected Lindstrom, a Dudley native and Boston College standout, and Wilkins, who grew up in Springfield and Framingham and starred at Clemson. Both were drafted in the first round with back-to-back picks in 2019 (13th and 14th overall). No excuses, I simply flubbed the research.

Happy retirement to Alex Smith, who walks away after 14 seasons, three Pro Bowls, and one horrific leg injury. He didn’t quite fulfill his promise as the No. 1 pick for the 49ers in 2005, and may ultimately be best remembered as someone whose team flourished once he hit the bench (Colin Kaepernick and Patrick Mahomes both took Smith’s teams to the Super Bowl). But all the respect in the world to Smith for coming back in 2020 and going out on his terms when it would have been easy to call it a career. Here’s hoping his right leg, which almost had to be amputated, won’t hinder him from having a fruitful post-football life . . . With Smith retiring, it leaves Aaron Rodgers, Richie Incognito, and Ryan Fitzpatrick as the only players left from the 2005 draft class still on a roster. The 2004 draft class is down to Ben Roethlisberger and Andy Lee, with Larry Fitzgerald still deciding on his future. Jason Witten in 2020 was the last player active from 2003, Josh McCown in 2019 was the last player active from 2002, and Drew Brees in 2020 was the last player from 2001. Tom Brady, of course, is the last player active from 2000. The last remaining position player from 2000 besides Brady was John Abraham, who last played in 2014 . . . Per covers.com, the Dolphins have better odds than the Patriots for the division, conference, and Super Bowl for the first time since 2004 . . . Thoughts and prayers go out to Steve “Mongo” McMichael, the former Bears five-time All-Pro defensive tackle and professional wrestler who revealed in the Chicago Tribune that his body is starting to shut down due to ALS. McMichael, 63, was a Patriots draft pick in 1980, was cut before his second season, and was picked up by Chicago, where he starred for 13 years and won a Super Bowl.