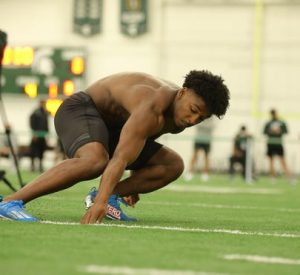 Free Press sports reporter Dave Birkett takes a position-by-position look at the top prospects and biggest Detroit Lions needs in the 2021 NFL draft. This is the sixth in an eight-part series.

The Lions are going young in the secondary in 2021, with their top two cornerbacks and both starting safeties still on their rookie contracts. It is a promising group, led by last year’s No. 3 overall pick, Jeff Okudah, but one that needs another dose of rookie talent.

Okudah had a disappointing first season in Detroit, when he played hurt most of the year. He has been re-energized by the coaching change, Lions president Rod Wood said, and the Lions brought in a good defensive teaching staff in coordinator Aaron Glenn and secondary coach Aubrey Pleasant that should help get the most out of his talent. Amani Oruwariye projects as the Lions’ No. 2 cornerback this fall, with veteran free agent additions Quinton Dunbar and slot man Corn Elder playing backup roles.

Tracy Walker should benefit from a move back to free safety, as he played out of position last year but was the Lions’ best defensive back in 2019. Will Harris is penciled into the other starting safety spot, though he has had an inconsistent start to his career. The Lions have both short- and long-term needs at safety and lack proven playmakers at cornerback, so it would not be a surprise to see them address either position early in the draft.

BIRKETT’S NEW MOCK:Lions land one of top non-QB prospects at No. 7

College football is producing more NFL-ready defensive backs than ever, and this appears to be a fairly deep draft at both cornerback and safety, but top-end secondary talent still is hard to find. Three cornerbacks stand apart in this draft class, and a trio of other defensive backs could go in Round 1. Virginia Tech cornerback Caleb Farley’s name does not appear in the above list, but he is the most physically gifted cornerback in the draft. He has significant injury concerns after undergoing multiple back surgeries that have put his draft stock in doubt.

Surtain, the son of the former NFL cornerback by the same name, should be the first defensive player off the board. He starred at Alabama and has the requisite size (6 feet 2, 208 pounds) and man coverage ability to be a difference maker. Horn, whose father, Joe, played receiver in the NFL, is almost Surtain’s equal as a prospect. He played both slot and outside cornerback in college and put up slightly better testing numbers at his pro day.

Newsome, the Big Ten’s top cornerback last season, clocked a sub-4.4-second 40 at his pro day to cement his status as a first-round pick. Florida State’s Asante Samuel Jr. and Kentucky’s Kelvin Joseph also could get pushed up into Round 1, depending on positional needs.

THE PICK:Lions have history of busts when selecting No. 7 in NFL draft

There is not as much first-round talent at safety, though Moehrig could come off the board on Day 1 because of his ball skills (seven interceptions in three college seasons). Lions GM Brad Holmes touted the depth of the safety class earlier this spring, and many of those players are solid Day 2 prospects like Holland, Johnson and Central Florida’s Richie Grant. Syracuse safety Andre Cisco tore his ACL last fall, and if teams are comfortable with his medicals, he could come off the board in the second or third round, too.