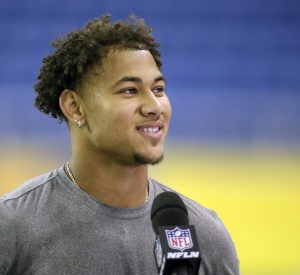 It’s finally that time of year.

After months of speculation and some notable trades, all 32 NFL teams are making final preparations ahead of the draft, which gets underway in Cleveland on Thursday.

Let’s take a closer look at some of the more interesting projections and latest expert mock drafts. Some experts choose to include trades in their mocks, making for a more interesting (and likely more realistic) dynamic. Others mock based on current draft order. Regardless, there are any number of intriguing hypotheticals to consider.

The wait is almost over.

The Miami Dolphins made one of the biggest moves of the pre-draft period by trading the No. 3 pick to the San Francisco 49ers. They then moved back up to the No. 6 spot after making a deal with the Philadelphia Eagles.

Mel Kiper of ESPN doesn’t think Miami is done trading. Kiper has the Dolphins moving up two spots to the No. 4 overall pick, though said pick might come as a slight surprise.

The Dolphins would seem strong candidates to take a wide receiver. But Kiper believes Miami will trade up to select Florida tight end Kyle Pitts.

So why would the Dolphins give up draft capital to take a tight end when they could likely get a top wideout at No. 6? Kiper reasons Miami could run dual-tight end sets with Pitts and Mike Gesicki, both of whom can line up out wide.

Pitts is garnering plenty of attention for his athleticism. He averaged 17.9 yards per reception this past season, finishing his junior campaign with 770 receiving yards and 12 touchdown catches. Pitts then ran a 4.44 40-yard dash, a remarkable time for a 6’6″, 245-pound tight end.

Dolphins general manager Chris Grier might have to move back up if Pitts is the player of interest. The Gators star said earlier in April that the Atlanta Falcons—the owners of the No. 4 selection—are “pretty interested” in him, per Kelsey Conway of Falcons.com.

But it might be worth it to select an athletic phenom like Pitts, who could be an awesome weapon for quarterback Tua Tagovailoa alongside Gesicki and wide receivers DeVante Parker and Will Fuller V.

Chicago Bears fans need little reminder of the organization’s inability to develop franchise quarterbacks. Might they get aggressive in order to select a top signal-caller in this year’s class?

Chad Reuter of NFL.com projects the Bears will trade with the Carolina Panthers to move up 12 spots from the No. 20 pick to the No. 8 spot. Reuter suggests the Monsters of the Midway will then use that selection to draft North Dakota State quarterback Trey Lance.

It’s not impossible to think general manager Ryan Pace will look to make a splashy move for a future franchise QB. Lance’s talents as a dual-threat quarterback make him an appetizing prospect. He completed nearly 67 percent of his pass attempts and threw for 28 touchdowns in 2019, also rushing for 1,100 yards and 14 scores. The North Dakota State standout sat out the 2020 season.

But there are a couple issues with this projection. For starters, Lance could be off the board within the first four picks. Rich Eisen reported the San Francisco 49ers might be angling to take Lance third overall.

Additionally, the terms of Reuter’s proposed trade don’t add up. Reuter suggests the Bears can trade the No. 20 pick, a 2021 third-round choice and another first in 2022 in order to move up to No. 8. However, the Panthers might demand more if they are moving that far down the board, particularly when other teams slated to draft ahead of Chicago could look to target Carolina’s pick.

Steve Palazzolo of Pro Football Focus excluded proposed trades from his mock. But he projects the Denver Broncos can still get a top quarterback even if they stay put at No. 9.

Palazzolo has the Broncos selecting Alabama’s Mac Jones ninth overall. He reasons Jones’ decision-making and consistency could make him the ideal fit for a Denver offense that has ample talent at the skill positions.

Indeed, the Broncos has a diverse group of playmakers on the offensive side of the ball. Courtland Sutton missed nearly all of 2020 with a torn ACL, but he was a 1,000-yard receiver in 2019 and is an established deep threat. Jerry Jeudy impressed especially as a route-running savant in his rookie season. KJ Hamler can make plays from the slot, while Noah Fant is a big and agile tight end who can work the seams.

Jones thrived under center for a loaded Crimson Tide team. He completed 77.4 percent of his pass attempts for 4,500 yards and 41 touchdowns against just four interceptions. Perhaps his success in Tuscaloosa will translate in Denver.

But similar to Reuter’s projected Lance-Bears partnership, there are questions to be asked here.

It is possible the Niners take Jones third overall. Even if Jones falls, the Broncos might not take a quarterback. Denver general manager George Paton told NFL Network’s James Palmer that the team remains high on incumbent starter Drew Lock (h/t Nick Shook of NFL.com), though he also stated the Broncos hope to instill some competition at the quarterback position.

Regardless, Paton—like numerous GMs around the NFL—has some decisions to make in terms of how highly he values Jones and the other quarterbacks in this year’s class.

All stats obtained via Sports Reference or Pro Football Reference unless otherwise noted.