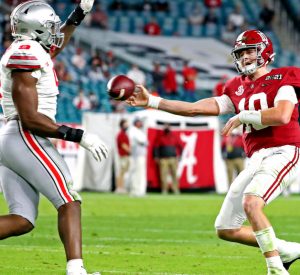 Every year, in every NFL draft, there are those players who present tantalizing athletic potential just as much as they put stuff on tape that make your eyes bleed. It happens at every position. There’s that quarterback who can make every throw — the good ones, and the bad ones. The running back who can blast through gaps at the line of scrimmage, but can’t get things going in the open field. The receiver who runs routes well, but doesn’t have the short-area quickness to gain separation. The cornerback or safety who allows as many big plays as he prevents. And on and on.

Last season, I had five such players on my list — the boom-or-bust guys who could alternately make their NFL teams shine with their greatness, and reduce the whole thing to rubble with the missing parts. And as it turns out, I have to take a MASSIVE “L” on Justin Herbert, who became a completely different quarterback with the Chargers once he got away from Oregon’s reduced passing game. And while I was concerned about the tackling abilities of former LSU and current Browns safety Grant Delpit, we never got to see how Delpit would develop in the NFL — he unfortunately missed his entire rookie season due to a ruptured Achilles tendon.

Jordan Love got exactly zero passing attempts in his rookie campaign behind Aaron Rodgers, which leaves Ohio State cornerback Damon Arnette, selected 19th overall by the Raiders, allowed one touchdown, had no interceptions, and gave up an opponent passer rating of 129.2 in nine games. Arnette had three games in which he allowed a passer rating of 39.6 or 0.0, and in his first NFL game, he gave up a perfect passer rating of 158.3. That’s about as boom-or-bust as you can get. And LSU edge-rusher K’Lavon Chaisson, selected one pick after Arnette by the Jaguars, had just one sack and 29 total pressures in 336 pass-rushing snaps.

So, the boom-or-bust picks from last season were pretty much… well, boom-or-bust. That’s the nature of the business when evaluating these types of players, and here are the riskiest such players in the 2021 class.

In Lance’s one full NCAA season (2019), he completed 66.9% of his passes for 2,786 yards, 28 touchdowns, and no interceptions, adding 169 rushing attempts for 1,100 yards and 14 touchdowns. From a tools-and-traits perspective, Lance has everything you want — intelligence, mobility, intermediate and deep accuracy. But it’s the one game he played in 2020 that may give evaluators pause. Against Central Arkansas on October 3, 2020, Lance completed 15 of 30 passes for 149 yards, two touchdowns, and the one interception of his college career.

Lance was far less certain as a quarterback against Central Arkansas’ array of blitzes and late coverage switches, which he’s going to see a lot more of in the NFL. That’s not to say that Lance will fail in the NFL, but even Randy Hedberg, his quarterbacks coach at North Dakota State, has said that Lance would benefit from sitting a year and learning the intricacies of NFL defenses. If his NFL team starts him too soon and throws him into the fire, things could get complicated.

Like Lance, Wilson presents a near-perfect skill set required for the modern NFL quarterback. He’s a dynamic second-reaction thrower, he’s got some ungodly good tape throwing deep out of play-action against helpless defenses, and he has an improvisational ability that the right offensive coordinator could mold into something truly special. But just as Wilson will blow you away with the kinds of throws you’d expect from an All-Pro quarterback (there are times when his good tape brings Aaron Rodgers to mind), Wilson also has a proclivity for the kinds of YOLO throws that can get him — and his team — in trouble. Ideally, Wilson will go to a team where his attributes will be maximized, and a patient coaching staff will work with him to keep the outliers in check.

All good from that perspective. What’s the problem? Jones is an old-school pocket quarterback with very little to offer in the way of second-reaction ability or mobility outside the pocket. And when you watch Alabama’s 2020 tape, you often see Jones aided ably by a dominant offensive line, an RPO-based offense that disheveled defenses, and a receiver group led by DeVonta Smith and Jaylen Waddle that gave Jones some pretty easy options — basically, wait for your guys to smoke coverage, and throw to who’s open.

Jones will need both personnel and schematic help at the NFL level, and his lack of mobility could be a concern for a lot of teams. Put him in a situation without that help, and it might be a problem.

Harris may be the “safest” running back in this class — if you want a guy who can run consistently with power in both gap and zone schemes and present as an above-average receiver, Harris might be your man. Last season, he gained 1,466 yards and scored 26 (!) touchdowns on 251 carries, adding 43 receptions for 425 yards and four more touchdowns. Harris was a scoring machine for the Crimson Tide, and he appears to be the next great NFL-ready back in that line.

But without the dominant offensive line he enjoyed at Alabama, Harris might struggle to be more than a consistent sustainer. Last season, Harris all 2021 draftable backs with 81 rushing first downs, but he had just 18 carries of 15 yards or more, and there are quite a few instances in which you’ll see defenders catching up to him, as opposed to Harris breaking away with second- and third-level acceleration.

All good if you want a running back who is productive and consistent as opposed to spectacular, and you have the offensive line to make it all go. But if you’re looking for a tone-setter in the first round? The tape tells an uncertain story.

Jenkins will be a very interesting evaluation for NFL teams. In his collegiate career, he allowed one sack, two quarterback hits, and nine quarterback hurries in 236 true pass sets. In 2020, runners going to his gap averaged 5.6 yards per carry, and 2.6 yards per carry before contact. And there are more pancakes on his tape than you’ll find at your average IHOP. He’s a frighteningly strong blocker, and if you want a road-grader on the outside right side of your offensive line, Jenkins could be your ideal right tackle. But there are issues, and they’re fairly obvious — he lunges when beaten by speed rushers, he struggles to mirror against more agile pass-rushers, and he could get his lunch eaten in pass pro in a deeper-drop passing game. I think Jenkins has the traits to be a dominant guard right now, and an above-average tackle over time, but will he ever be able to do more than consistently throw guys around at the edge? At this point, it’s an unanswered question.

When watching Cosmi at left tackle for the Longhorns, two divergent views come to mind. He’s tremendously agile, has above-average power, and from a traits perspective, he has everything you want in a developmental pass-protector. In 495 true pass sets (a comparatively high number in this class) over three seasons, Cosmi allowed just three sacks and 23 total pressures. That’s the upside. On the downside, Cosmi may need more “coach-’em-up” than any highly-ranked tackle in this class. As much as he moves naturally, Cosmi will also lose defenders to bad technique and he’ll occasionally have whiffs in which he’s just not in the play. With top-tier coaching and a strong O-line room, Cosmi could over time become a dominant NFL player, but expecting him to be that right off the bat could get a team in trouble.

Wilson played with extra weight and dealt with a knee issue in 2020, and it showed up problematically, as he was not as quick or explosive as he had been in 2019. In 291 pass-rushing snaps in 2019, Wilson amassed five sacks, six quarterback hits, 15 quarterback hurries, and five batted passes. He followed that up in 2020 with one sack, three quarterback hits, six quarterback hurries, and no batted passes on 127 pass-rush snaps before a leg injury ended his season. Wilson looked like a first-round pick in 2019, and a third-day guy in 2020. It will be up to NFL evaluators to deduce how much of that was injury-related, but there is now unfortunately a “buyer beware” aspect to Williams that there wouldn’t have been had he made himself available for the 2020 draft.

On the surface, Rousseau would appear to be the very model of the modern multi-gap pass-rusher. At 6-foot-7 and 266 pounds, Rousseau is built like a very angry tight end, and he has the quickness and flexibility to play off-ball and drop into short coverage. He opted out of the 2020 season, but in 2019, Rousseau had 405 snaps outside the tackles, 28 snaps over the tackles, 18 snaps in the B-gap, and 71 snaps in the A-gap. Wherever you put Rousseau in college, he was going to disrupt — in 2019, he had 15.5 sacks, 19.5 tackles for loss, six quarterback hits, 24 quarterback hurries, and 40 stops.

But with Rousseau, the question is how far he’s come with the more technical aspects of his game, and how well will be able to use hand movement and counters against NFL-level blockers? These were issues even when Rousseau was at his most productive, and he may be one of those pass-rushers who learns technique in his first NFL season, only to turn it on later in his first contract.

Syracuse safety Andre Cisco’s interests include: Jumping routes for picks, biting on the occasional double move, giving up a few too many touchdowns, and BLOWING YOUR ASS UP over the middle. pic.twitter.com/n9FTywoafJ

So, what’s the problem? As intimated in the above tweet, Cisco’s aggression can be used against him. This was especially true in 2019, when he allowed six touchdowns to those five interceptions. At times, he’ll bite hard on play-fakes, run himself out of position in coverage (especially against complex route concepts), and he’s not always an exact tackler from a technical perspective. Cisco has all the physical tools to be a great NFL defender, but his coaching staff will have to chip away at the rogue elements of his playing style.