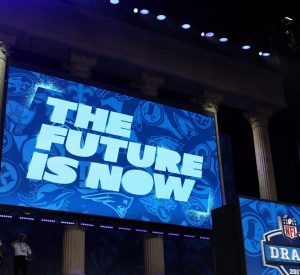 How do the previous 15 first-round picks at the hands of the New York Giants match up with one another?

The first round of the NFL Draft is rapidly approaching — starting Thursday night at 8:00 p.m. ET, many questions will be answered and fans will start debating which players will thrive on their new teams and which will not.

Of course, there’s bound to be at least a few busts; let’s just hope those eventual busts don’t find themselves on the New York Giants, which has been the case numerous times over the last decade or so.

Like all teams, Big Blue has nailed it with some opening-round selections and blown it with others.

This one is obvious, even with the bust that is Ereck Flowers additionally on the list.

The Giants traded away three picks in order to put themselves back in the first round, and with the No. 30 overall pick during that 2019 draft, took Georgia’s DeAndre Baker (2018’s top collegiate defensive back).

Baker started 15 games for the Giants in 2019, portrayed slim (if any) development, and was part of numerous effort-related controversies. He ultimately allowed quarterbacks to complete 61.4% of throws for 850 yards and a 116.2 passer rating when targeting him.

His rookie season was filled with struggles, and his off-field life wasn’t exactly a cakewalk either. Last year, Baker was charged with four counts of robbery with a firearm after an alleged incident at a Florida cookout.

Baker faced years in prison and New York eventually released him after one season.

The young defensive back has since been exonerated of all charges and is back playing football for the Chiefs, but giving up multiple picks for one year of both on-field and off-field struggles was not the greatest look for general manager Dave Gettleman.

Ereck Flowers’ struggles from the left tackle spot were a huge reason why the Giants were 25th and 21st in total offense in 2016 and 2017, respectively. The team seemingly would take another chance on him each year; eventually, New York could no longer handle the constant mistakes and released him in 2018.

Taking the usual route of a significant draft bust, Flowers has bounced from team to team in recent years, portraying his skills (or lack thereof) for Jacksonville, Washington, and now Miami.

Eli Apple was supposed to provide a notable boost to a Giants pass defende that was the worst in the NFL the year prior.

Instead, the former Buckeye seldom made any sort of significant impact and was dubbed a “cancer” by then-Giants safety Landon Collins in 2017. Apple was eventually suspended for the final game of the 2017 regular season after arguing with the coaching staff, and although he was surprisingly brought back in 2018 by Pat Shurmur’s regime, the Giants traded him to New Orleans prior to that year’s deadline.

Like Flowers, Apple has bounced from team to team since his Giants tenure concluded in 2018, having spent time with the Saints and Panthers before signing a deal with the Bengals this offseason.

David Wilson was a solid return specialist and looked as if he was going to be the next long-term answer for the Giants at the running back position. His rookie season culminated with a league-leading 1,533 kick return yards and a spot on the All-Pro second team.

The problem, however, is that his significant production lasted just one full season — after suffering a neck injury in Week 5 of the 2013 season, Wilson missed the remainder of that year and was ruled out for the 2014 campaign as well.

Doctors recommended he never play the sport again, so his Giants tenure unfortunately came to a conclusion after just 21 career games.

He was fun to watch though, don’t get me wrong.

Is Andrew Thomas the Giants’ future at the left tackle position?

So we hope, and he did develop over the course of last year, but it’s yet to be confirmed if he really carries the talent and potential to be the long-term answer.

Despite improving in 2020, Thomas still got off to a slow start and didn’t put together the appropriate number of impressive performances for fans to formulate an overly positive opinion on him.

But Thomas’ future is a wait-and-see type of situation — fans must remain patient with him.

While he wasn’t a star in the pros, Prince Amukamara still gave the Giants five decent years, proved to be a physical corner when healthy, and was a Super Bowl champ.

The injuries were an issue though, which is why he comes in at No. 10 on this list.

During his half-decade tenure in East Rutherford, Amukamara played a full season just once — in 2013. It’s actually the only 16-game season he’s ever played throughout his entire NFL career.

Instead of bringing Amukamara back prior to the 2016 season, the Giants elected to sign Janoris Jenkins to a five-year deal and prioritize him as the roster’s top cornerback.

Kenny Phillips was an Amukamara-type player — he could step up when healthy, but consistent health wasn’t always present. Phillips played in just two full seasons out of the five total years he was with the Giants, but the reason he cracks the top ten on the list is because of the impact he made during the Super Bowl-winning 2011 season.

The 2008 draft pick was tied for second on the team with four picks that season and second among defensive backs with 82 combined tackles.

No, he hasn’t been on the field for too long, but it’s tough to overlook what Daniel Jones was able to do as a rookie in 2019 with a struggling offensive line and no true No. 1 wideout. Not to mention, tight end Evan Engram missed eight games that year while Saquon Barkley dealt with a high ankle sprain for much of the season.

Amid all the on-field dysfunction (and the inconsistent and uncreative play-calling from Pat Shurmur), Jones was still able to throw 24 touchdown passes and provide fans with hope that he could be the future face of the franchise.

This past season wasn’t all sunshine and rainbows, but there were numerous external factors that played a role — the injuries, the coaching staff change, poor offensive line play, as well as numerous injuries to offensive weapons. In fact, Jones played just one game in which Sterling Shepard, Saquon Barkley, Darius Slayton, Golden Tate, and Evan Engram all entered healthy — Week 2 against the Bears, and that lasted a quarter (Barkley tore his ACL at the beginning of the second quarter).

Evan Engram finds himself in the middle of this list — his tenure with the Giants has been full of positives and negatives.

There have been times when Engram looks like he could be one of the more athetlic and versatile tight ends this league has to offer. Other times, the drops, missed blocks, and overall mistakes cause the confidence in him to descend.

It’s still unclear if Engram is someone the Giants will want to employ for the long term. Entering his fifth NFL season, there are a number of on-field issues he’ll need to fix.

Dexter Lawrence has been great for the Giants through his first two years in the league and is proving to be one of the NFL’s more talented young defensive linemen.

In 2019 and 2020, Lawrence recorded solid Pro Football Focus grades of 76.2 and 79.7 and was a great complement to both Leonard Williams and Dalvin Tomlinson on the defensive line. His efforts additionally led to the Giants finishing in the top 10 in the league with 111.4 rushing yards allowed per game last season.

It’s understandable there are some question marks surrounding Saquon Barkley right now given he’s dealt with a number of injuries that have plagued him over the last two seasons.

But when he’s healthy, there’s no question he’s arguably the top back in the league and one that carries the potential to be the top running back in franchise history.

Barkley returning better than ever next season will assist in the development of Daniel Jones — the young quarterback must take that leap in 2021 in order to provide the organization with hope that he’s the answer at the quarterback position moving forward.

The Giants decided not to bring back 2013 first-round pick Justin Pugh following the 2017 season, and given the status of the offensive line ever since, that probably wasn’t the most beneficial move.

Pugh portrayed on-field versatility during his Big Blue tenure, playing both the guard and tackle positions. Regardless, injuries played an unfortunate role — he took part in just eight games during the 2017 campaign.

If injuries didn’t come about, Hakeem Nicks could’ve been one of the more productive wide receivers of his time. He had superb hands, size, athleticism, and possessed the overall ability to be a No. 1 receiver for Eli Manning in the early 2010s.

A star in New York/New Jersey.

Odell Beckham Jr. had all eyes on him from the time he first hit the field, with the one-handed catches, the dancing in the end zone, and the tad bit of controversy that drove the old school fans crazy.

Beckham saved the jobs of numerous people. Eli Manning, Tom Coughlin, and Jerry Reese could’ve been out the door at some point before they actually were.

Three Pro Bowls, two selections to the All-Pro second team, and an NFL Offensive Rookie of the Year? Needless to say, Beckham was unstoppable for the first few years of his career.

Of course, Beckham put his days in blue in the rearview when he was traded to Cleveland prior to the 2019 season.

Like Hakeem Nicks, Jason Pierre-Paul was also a monstrous factor during the Giants’ Super Bowl 46 run, and given his long-lasting impact, he comes in at No. 1 on this list.

It didn’t take long for JPP to make a name for himself — in his second season (2011), Pierre-Paul earned his first-ever Pro Bowl bid and first-team All-Pro selection after notching 16.5 sacks and 28 quarterback hits.