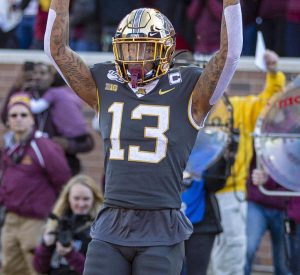 It’s not often you see four-star recruits out of Georgia head out to Minnesota to play for the Gophers in the Big Ten, but that’s exactly what Rashod Bateman decided to. In the process, Bateman, a two-sport athlete, decided to pass up scholarship offers from Virginia Tech and Penn State to play basketball. The basketball background is easy to see when watching Bateman, who plays much bigger than his size would indicate and displays nuanced footwork when it comes to his releases off the line of scrimmage. Ultimately, after receiving 20 football scholarship offers, Bateman decided to join P.J. Fleck at Minnesota.

Bateman set single-season high school records in receptions, receiving yards and receiving touchdowns before leading the NCAA in yards per route run (from an outside alignment, per Pro Football Focus) as a sophomore. He even added experience as a slot receiver in 2020 to his arsenal. While Bateman isn’t the flashiest prospect, he separates from coverage with ease and has consistently proven himself a deep threat. This makes him one of the most exciting prospects for Fantasy both in redraft and Dynasty formats.

We’re breaking down everything you need to know about Bateman from a Fantasy manager perspective, including best fits, Dynasty outlook, measurables, scouting report, key stats and an NFL comparison.

One of the most common NFL comparisons we’ve seen for Bateman is Chargers receiver Keenan Allen. Both receivers do an excellent job creating immediate separation off the line of scrimmage with football and lateral agility. We already saw in 2020 what this kind of receiver could do with Justin Herbert when Allen dominated on a per-game basis. Herbert might be the perfect QB fit for Bateman, and there is plenty of passing game volume to go around with Hunter Henry moving on to New England and given former first-round pick Mike Williams‘ inability to avoid the injury bug.

The Ravens are still looking for a receiver who can mesh well with Lamar Jackson’s skill set as a passer. They previously used a first-round pick on speedster Marquise Brown, and while Jackson has displayed excellent touch at times as a vertical passer, the consistency is not always there. However, in the RPO and quick-hitting game — an area of the passing game he mastered at Louisville — Jackson would benefit from a receiver like Bateman, whose calling card is getting open quickly off the line of scrimmage. Bateman also adds a vertical element here and would likely benefit from constant single coverage as opposing safeties are forced to account for both Jackson and the Ravens’ backs in the run game.

Bateman didn’t quite make the cut as the top receiver prospect class and here’s your chance to find out why. We break down top receiver prospects Ja’Marr Chase, Jaylen Waddle and DeVonta Smith on the Fantasy Football Today in 5 podcast. Listen below and follow at Apple, Spotify or wherever you get your podcasts:

Bateman is no secret in Dynasty leagues and is consistently selected in the first round of one-QB rookie drafts. Regardless of Bateman’s landing spot, he’s likely to be a first-round rookie pick. However, if he lands with the right team, and any of the big-three receiver land on a crowded depth chart, Bateman could be a landing-spot-based riser in rookie drafts. In our recent rookie only-PPR mock draft, I grabbed Bateman with the 10th pick in the first round. In the rookie-only Superflex mock draft, Heath Cummings grabbed Bateman with the first pick in the second round (13th overall).

Bateman’s ability to win so immediately off the line of scrimmage is what makes him sneaky as a prospect. Similar to players like Keenan Allen and Michael Gallup before him, Bateman doesn’t have the flashy traits and so it’s possible he could slip into Day 2 of the draft like they did. I don’t fully see Allen or Gallup when watching Bateman, but he reminds me most of a smaller but quicker version of Cooper Kupp. Ultimately, when translating to the NFL, I think his best fit could come in the slot.