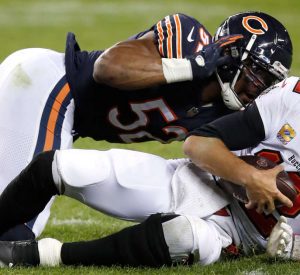 One of the most compelling aspects of any NFL draft is the wheeling and dealing.

2021 NFL draft: Will these orospects boom or bust?

The annual “Player Selection Meeting” typically entails dozens of trades, some remnants from previous years but the bulk taking place over the course of the three-day, seven-round event. Some clubs are historically active, others have a reputation for eschewing such maneuvering. Yet, leading up to Day 1, nearly every general manager will profess a willingness to take all phone calls and explore the merits of moving up or down.

© Jeff Haynes, AP
Khalil Mack (52) and the Bears might be in the NFL draft trade market for vastly different reasons than Tom Brady’s Buccaneers.


“If you move back, it’s because you feel like you have a bunch of guys that are the same value – and you’d be really happy getting one and getting the extra volume from that pick,” Eagles general manager Howie Roseman said last week.

FALLING? Five NFL draft prospects who could slide out of the first round

JULIO JONES TRADE?: Why Falcons could move on, and where WR might go

Or, sometimes, you just need to restock. The Seahawks began the 2019 draft with a league-low four picks but ultimately drafted 11 players, including WR DK Metcalf, thanks to GM John Schneider’s ability to flip picks. (Anticipate more of the same this year given Seattle owns three selections, fewest in this draft.)

Most transactions purely involve the exchange of current and future selections, though established players occasionally become part of the equation. Eventual Hall of Fame receiver Randy Moss was famously acquired by the Patriots during the 2007 draft for a fourth-rounder. Whispers emerged Monday that Atlanta star wideout Julio Jones might be on the block.

Yet the 2021 draft comes with an added twist in a year when the scouting process was significantly disrupted by the COVID-19 pandemic. Talent evaluators didn’t have the same level of access to prospects or college programs in 2020, and numerous high-profile players opted out of the season altogether – meaning a heavy reliance on 2019 game film and perhaps an unwillingness by NFL clubs this year to invest in commodities that might be bigger unknowns than they usually are.

“There’s nothing I can compare this to,” Giants GM Dave Gettleman said last week. “(W)ith a handful of these guys, it’s almost like the NBA one-and-done – they go to college for a year and now, bang, they’re in the NBA.”

At least, unlike the NBA, NFL trades don’t get complicated by lottery protection qualifications and such. But deals, as they’ve already done in recent weeks, are sure to change the complexion of this draft and future ones into the weekend.

Here are 11 teams that seem likeliest to be working the phones in order to make high-impact trades in the coming days:

They’re in a tricky spot, with several talented but aging players like Jones on the roster, a new regime, and a brutal salary cap situation – one that essentially makes it impossible to move on from QB Matt Ryan, who turns 36 in a few weeks. The Falcons clearly need to rebuild, yet can’t really delve into a complete reset – all this while they must decide whether to take Ryan’s successor with the No. 4 pick, a top-tier talent at another position, or trade the selection … while ensuring they’re still in position to get a cornerstone player. Should be an interesting draft debut for first-year GM Terry Fontenot.

They’ve already made one bold swap, sending OT Orlando Brown Jr. to the Chiefs on Friday as part of a package that brought Kansas City’s first-rounder back to Charm City. Armed with multiple selections in Rounds 1, 3 and 4, expect the Ravens to be aggressive – as they tend to be – given they’re likely in the market for pass rushers, a receiver, a safety and maybe a long-term replacement for Brown.

Another club with a rookie general manager, Scott Fitterer, who’s already made a major move by acquiring QB Sam Darnold from the Jets. Fitterer still possesses the No. 8 selection, which he could use on another quarterback or blue-chip prospect … or dangle to QB-needy teams looking to jump ahead of the Broncos, who sit at No. 9. Coming off a 5-11 year and needing to see what Darnold can provide in a better environment, the Panthers are hardly in go-for-it mode.

They’re back in Round 1 for the first time since 2018 after working off their Khalil Mack debt. But last year’s belated playoff push has the Bears stuck at No. 20 even though they finished 8-8. Still, don’t be surprised if GM Ryan Pace and coach Matt Nagy, both already on warm seats in April, take a big swing – perhaps mortgaging future assets once again in a bid to find a quarterback or player they believe will make them more than a fringe playoff squad. Won’t be easy given half of Chicago’s eight selections are in the sixth round, but desperate times call for … well, you know.

Do Jerry Jones and Co. get antsy, given QB Dak Prescott is newly extended and on the road to recovery for a team likely to be the NFC East favorite? Florida TE Kyle Pitts represents Jones’ “dream of visions and sugar plums around here,” but it seems unlikely Dallas will pay the price to jump up exceedingly far from No. 10 in Round 1. But for a squad that needs reinforcements on the O-line and must shore up 2020’s highly permeable defense, it wouldn’t be a surprise if the Cowboys use mid-round ammo – they have multiple picks in the third, fourth and sixth rounds – to target players earlier in the process.

The world has known for four months that they’d be picking first overall and using that choice on Clemson QB Trevor Lawrence. But new coach Urban Meyer and GM Trent Baalke have the flexibility to do a lot of other things. Aside from the No. 1 selection, they have four others in the top 65 – including the No. 25 overall selection from the Rams as part of the Jalen Ramsey swap – as well as multiple picks in Rounds 4 and 5. The talent already in place in Duval County isn’t indicative of a 1-15 team, so it wouldn’t be a shock if the Jags focus on another premium player or two beyond Lawrence.

They’ve already shaken the draft up once, sending the No. 3 pick to the 49ers last month before moving back into the top 10 thanks to a subsequent deal with Philadelphia. GM Chris Grier indicated last week that the Fins currently sit at No. 6 comfortable with whomever is available to them. Yet it’s worth wondering if a club that’s been steadily accruing draft capital might move out again if, say, Pitts and LSU WR Ja’Marr Chase have already been taken. Given there are teams behind Miami – perhaps Denver or even a club in the middle of Round 1 – that need a quarterback, don’t be surprised if Grier drops down.

After they broke from their tendencies and jumped into the deep end of the free agency pool, no one would be surprised if the Pats – they always hopscotch around the draft order, often to amass future currency – strike with an aggressive move, perhaps Thursday. They haven’t picked as early as their current slotting at No. 15 since 2008, when they chose LB Jerod Mayo 10th overall. But for a franchise with uncertainty at quarterback – after enjoying unprecedented stability at the position for two decades – this might be the right time to make a gambit for Ohio State’s Justin Fields or Alabama’s Mac Jones or North Dakota State’s Trey Lance to establish a direction after Cam Newton’s second one-year deal expires next year.

JARRETT BELL: Bro hugs may be back at NFL draft, but is push for normalcy safe?

Their circumstances parallel Jacksonville’s. BYU’s Zach Wilson is expected to become the NYJ’s new quarterback with the No. 2 pick. But GM Joe Douglas has an additional first-rounder, a high second (No. 34) and multiple choices in the third, fifth and sixth rounds. New York needs foundational players and depth, so Douglas – and he already has an additional first- and second-rounder next year – has ample options.

Ever since they threw in the towel against the Washington Football Team in the final regular-season game of the 2020 season, it’s seemed this is an organization with an eye on 2022 and beyond – and given the holes on the roster, it’s a reasonable approach. Roseman has already moved out of the top 10, and seems like a prime candidate to deal down again to add to next year’s stash, when he’s likely to have two first-rounders … assuming former Philly QB Carson Wentz remains upright in Indianapolis.

What do you give the person who has everything? Cash? Gift cards? Future draft considerations? It should be fascinating to see how the Super Bowl champions, who have their entire starting lineup returning intact for a repeat bid, navigate a player pool when they don’t really need anything. Sure, the Bucs could certainly improve their depth, get younger (and cheaper) in some areas and/or target specific supplementary weapons for QB Tom Brady and defensive coordinator Todd Bowles. And yet GM Jason Licht might be able to achieve such aims while procuring assets for a rebuild that will inevitably come in the near future. The 32nd pick is often an attractive one to teams who might want to come back into Round 1 for a QB and the extra year of contractual control it affords.

This article originally appeared on USA TODAY: 11 NFL teams that could trade up or down in 2021 draft