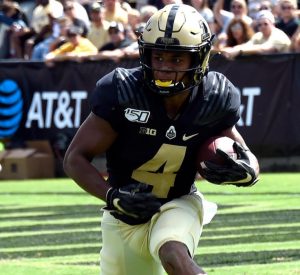 Rondale Moore was one of the most explosive and elusive skill position players on film during the 2018 collegiate season, but his star dimmed a bit during the past several months of the pre-draft season. After an injury-plagued 2019 season and opting out of most of the 2020 season plus concerns about his size took the forefront, Moore started falling behind in mock drafts. That was until his pro day. Moore clocked a 4.29 40-yard dash with a ridiculous 42.5-inch vertical jump reminding everyone just how explosive he could be at the NFL level.

Moore came to Purdue after a legendary career in Kentucky high school football. He led Trinity High School to consecutive Class 6A state titles as a junior and senior, including a perfect 15-0 season in the final year of his preps career. He set the school record for receptions (104), receiving yards (1,461) and touchdowns (16), and in the process earned the Gatorade Kentucky Player of the Year honor in 2017. Moore received 20 offers as a four-star recruit (per 247Sports), including one from Alabama, before deciding to play for the Boilermakers.

We’re breaking down everything you need to know about Moore from a Fantasy manager perspective, including best fits, dynasty outlook, measurables, scouting report, key stats and an NFL comparison.

A talent like Moore would make for the perfect fit in Matt LaFleur’s offensive system because LaFleur would be able to use him in pre-snap motion and get him designed touches in space right away with the defense focusing on Davante Adams. Also, Aaron Rodgers‘ quick release and short-game passing velocity will leave no wasted time and allow Moore to do what he does best — create yardage after the catch. Moore’s 4.29 vertical speed will also fit perfectly with Rodgers’ deep-ball ability.

Kliff Kingsbury’s system was designed for receivers like Moore, and ultimately what Arizona had envisioned when it used high draft capital on Andy Isabella. Drafting Moore would also allow Kingsbury to move Moore into the backfield at times and put him in motion before the snap, providing the defense with a lot of speed to worry about.

Moore is a hot commodity in rookie drafts that are taking place before the NFL Draft with the idea in mind that he can be an immediate asset regardless of what offensive system he lands in. This should be especially true in PPR leagues where he has massive upside if he jumps into an offense that will manufacture quick-hitting touches for him. In our recent full-point PPR rookie-only mock draft, Heath Cummings selected Moore at No. 7 overall. In our recent Superflex rookie-only mock draft, Moore came off the board at No. 12 overall.

You’ve possibly seen the comparisons to former NFL and Carolina Panthers great Steve Smith, and while Moore has some Smith to his game, he’s not nearly as developed as a route runner on the outside and overall just yet. He remains a projection in many ways, but at the same time, it’s not fair to call him a gadget player like Tavon Austin was entering the NFL. My NFL comparison for Moore would be a souped-up Jakeem Grant.