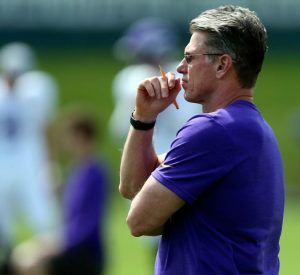 MINNEAPOLIS – He’s done it so often that it’s earned him a catchy nickname and reputation as one of the savviest at maneuvering a draft board.

“Trader Rick,” is also the modus operandi for Minnesota Vikings general manager Rick Spielman, who has a penchant for knowing how to execute trades during the NFL draft (Thursday-Saturday on ESPN/ESPN app) to maximize value. It’s resulted in 35 draft-day trades since 2012, which is tied for the most in the NFL in that span.

Spielman relies on an abundance of picks to increase his odds of hitting on talent. Sometimes that means using the additional draft capital to trade up and land a player the Vikings don’t expect to be available later on, like they did with running back Dalvin Cook in 2017.

That strategy has also given the Vikings a chance for more bites at the apple with late-round picks they hope will develop from special teams contributors to key backups and maybe even starters.

But the Vikings have discovered more picks do not necessarily equate to more success, and the period it takes to develop those players drafted later may not work within their timeline. As the pressure to win now increases coming off a 7-9 season, can Spielman afford to continue with business as usual?

Since Spielman’s first draft as general manager in 2012, the Vikings have had no smaller than an eight-man draft class, and no team has drafted more players than Minnesota (93) in that time frame.

Minnesota entered the 2020 draft with 12 selections and came away with 15, the most by any team since the draft switched to a seven-round format in 1994.

“I treasure those (draft picks) and I try to collect as many as I can,” Spielman said after the 2020 draft. “When you have that much draft capital going into it and you’re able to flip some picks into next year’s picks … to start off right now where we stand to have 12 draft picks (in 2021), who knows where we’re going to end up next year.”

Spielman believes each late-round draft pick gives the franchise a better chance to strike gold. While the preferred result would be finding the team’s next Adam Thielen, Anthony Harris or Marcus Sherels — three players the Vikings found as undrafted free agents — Spielman’s inclination to load up on sixth- and seventh-rounders has paid off at times.

Spielman’s passion for late-round draft capital has led the Vikings to draft 41 players in the sixth and seventh rounds since 2012, which is 10 more than the next closest team (Los Angeles Rams).

A key part of Spielman’s strategy in stocking up on Day 3 prospects is avoiding the bidding war that comes in college free agency after the draft and stocking up on sixth- and seventh-rounders to play pivotal roles in areas like special teams.

Spielman says that strategy might be different this week given that there are fewer draft-eligible players in the 2021 draft because some returned to school due to the circumstances of the COVID-19 pandemic. But draft grades for late-round picks often mirror those for undrafted free agents, and there’s a financial benefit to being savvy late on Day 3. A sixth- or seventh-round pick provides the Vikings with a player on an inexpensive four-year rookie deal rather than overpaying for veteran backups in free agency to play the same role.

The sixth- and seventh-round picks the Vikings drafted since 2012 have played 858 games (the most of any team in that span) and 17,324 snaps, which are the fourth most behind the Patriots (20,765), Steelers (18,490) and Eagles (17,614). The reason for the disparity is due to the amount of Minnesota’s sixth- and seventh-round special teamers, who get credit for games but not for official offensive or defensive snaps.

That strategy did not pan out last year. The Vikings’ 2020 draft class is considered a big success given the contributions of Justin Jefferson, Ezra Cleveland, Cameron Dantzler and D.J. Wonnum. But that’s where it stops.

In that 15-man draft class, two players came from the sixth round and four from the seventh. None of those selections made the roster at cutdown day. Most wound up on the practice squad, which plays a critical role in the depth of any team, but only Josh Metellus, a safety drafted at No. 205, made it to the active roster.

Three Day 3 picks from 2019 — Armon Watts (13 tackles, 1.5 sacks), Kris Boyd (22 tackles, 1 pass defended) and Bisi Johnson (31 catches, 294 yards, 3 TDs) — played far bigger roles as rookies than anticipated (largely due to injuries). But those early contributions didn’t lead to a major jump for any of the three in their second seasons.

Doug Kezirian and Joe Fortenbaugh look ahead to next season and predict which teams will fall over/under their projected win total.

The Vikings have developed functional starters from the sixth and seventh rounds such as Stephen Weatherly, Shamar Stephen and Ifeadi Odenigbo with the benefit of time on their side. That’s not a luxury the Vikings have in 2021, given they have not missed the postseason in back-to-back years since coach Mike Zimmer arrived in 2014.

Even with all the late-round draft picks, the Vikings have still spent big on college free agents, guaranteeing $1.63 million to UDFAs since 2012 (ninth most in the NFL). Minnesota guaranteed $100,000 each to UDFAs Quartney Davis and Nevelle Clarke last April. Neither made the roster at cutdown day or were picked up by another team last season.

The 2021 draft will be Minnesota’s third straight with double-digit draft picks. With pressing needs at offensive line, safety and defensive end and 10 selections at his disposal, it may be time for Spielman to reconsider his strategy. That could mean swapping more bites at the apple for a higher-rated draft pick who could contribute sooner for a team that needs to win now.

Minnesota is slated to pick at No. 14 in the first round and not again until No. 78 in the third. The Vikings do not own a second-round pick, and that’s a 64-pick gap between selections.

Whether the Vikings will remain patient is “yet to be determined.”

A look at any reputable chart that tracks draft selections and their value by round shows a considerable dropoff on picks made later into Day 3. Spielman doesn’t appear pressed by the situation and believes the Vikings have the resources to close the gap between their first- and third-round selections.

“I think right now we have four fourth-round picks, which does give you the ability to move back into the second round,” Spielman said. “To have the draft capital that we have, it gives us a lot of flexibility, hopefully, to be able to move up in the draft if we want to go do that.”

Being aggressive in trading up rather than back is what Spielman should aim for, along with bucking a trend. He has never traded up from his initial position in the first round. With several holes on the offensive line, particularly at left tackle, if the Vikings want a considerable upgrade, it may cost them to move up from No. 14.

What you need to know about the Minnesota Vikings:

“They could be in a position where they can get one of those two (Oregon’s Penei Sewell and Northwestern’s Rashawn Slater, both offensive tackles),” ESPN draft analyst Mel Kiper said. “But can they get one of those two where they’re picking (at No. 14)? I don’t necessarily see that happening. I think they’ll both be gone. So, if you want to get Sewell or Slater, you’ve probably got to move up from 14.”

The Vikings may also want to address a contingency plan at quarterback in the draft given and the potential for a young player to learn under Kirk Cousins and maybe replace him someday.

The benefits of having a starting QB on his rookie contract would allow the Vikings to spend their financial resources elsewhere in the future. But without a second-rounder and their first Day 2 pick coming 14 selections into the third round, their chances of landing a quarterback like Davis Mills, Kellen Mond or Jamie Newman could shrink.

Spielman has done well in certain areas of the draft – the Vikings have the ninth-most starts (208) by second-rounders over the past six seasons – and missed on others, like most general managers. But he’s the seventh-longest tenured GM in the NFL and has yet to deliver a Super Bowl to Minnesota. Five other GMs who have been around at least as long as Spielman have either reached the Super Bowl or won a Lombardi Trophy.

Modifying his draft philosophy could improve Minnesota’s chances for success and protect Spielman’s job security. His aggressive trading nature in the draft is second to none. But this time, he needs to consider climbing up the board instead of trading back.