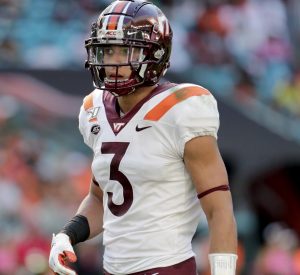 We’re almost there, draft fans! The 2021 NFL draft is less than 48 hours away, which means the Jacksonville Jaguars’ selection of Trevor Lawrence at No. 1 overall will soon be official. BYU’s Zach Wilson is widely expected to go second overall.

There are some top prospects, including Lawrence, Wilson, Kyle Pitts and Ja’Marr Chase, who should be locks for the top 10. However, after a year of pandemic football, opt-outs and virtual workouts, teams’ draft boards are going to vary wildly.

“From 20 down, you can pick them out of a hat. Who knows? Someone you might have at 60 could be going there,” one general manager told Albert Breer of Sports Illustrated.

What isn’t unique is the fact that some late risers and fallers are emerging in the days before the draft, which starts Thursday in Cleveland. This is a common occurrence because it can take time for media outlets and insiders to catch up to how teams actually view prospects.

Here, we’ll examine some who appear to be sliding. We’ll also look at the recent buzz that could indicate draft-day falls, though it’s worth bearing in mind that smokescreen season isn’t over yet.

Prospects are listed in alphabetical order by last name.

From a talent standpoint, Alabama defensive lineman Christian Barmore should be one of the first defenders off the board. He is the 32nd-ranked prospect on Bleacher Report’s big board 3.0 and its highest-ranked interior defensive lineman.

However, Barmore’s inconsistent game tape, tendency to freelance and apparent concerns about his character potentially push him out of the first round.

Barmore “is a little bit of a more difficult one for teams to wrap their arms around—and that’s one reason why he’ll go later than his talent should dictate,” Breer wrote.

Not everyone is sold on his upside either. Hall of Famer Warren Sapp had an opportunity to work out with Barmore this offseason and didn’t come away impressed.

“What I saw when I went over to the Yo Murphy Performance [Compound] was not even third-round material,” Sapp told the Pewter Report podcast.

There can often be a disconnect between how a player practices or works out and his in-game performance. However, when that player carries other red flags, it could be a deal-breaker for some teams.

There’s a real chance that every team will shy away from Barmore on Thursday night.

Virginia Tech cornerback Caleb Farley is another player with first-round talent who could slide into Day 2. The cover man opted out of the 2020 season and has undergone two back surgeries since he was last on the playing field.

This has already caused his stock to take a hit. In Bleacher Report’s first big board, for example, he was the 18th-ranked prospect. In version 3.0, he is 26th.

But Farley’s slide could continue. According to NFL Media’s Ian Rapoport and Tom Pelissero, some teams believe he’ll fall out of Round 1:

“Several general managers told NFL.com this week they have no major concerns about the medical report on Farley and believe he’ll still go in Round 1. Others say they believe he’ll slide to Round 2. Some of those teams are now running through scenarios to decide: At what point in the draft would they be willing to take a calculated risk that Farley’s back problems are behind him and land a top-tier talent?”

It’ll only require one team to take a chance on him, but a potential slide will be impacted by where other cornerbacks are taken. Even if, for example, the Cleveland Browns are comfortable taking Farley at No. 26, they might opt for a prospect like Northwestern’s Greg Newsome II if both are on the board.

There are plenty of unknowns, but the one certainty is that Farley is no longer a lock for the first round.

Barring something shocking, Ohio State quarterback Justin Fields isn’t going to fall out of the first round. However, he’s already experienced his share of sliding stock.

During the 2020 season, some viewed Fields as a prospect on par with Trevor Lawrence.

“We started the season and pretty much everyone said Trevor Lawrence is here and then it’s the rest of the field. I don’t think so. I think these guys are neck-and-neck,” ESPN’s Mark Sanchez said on Get Up (h/t Rolando Rosa of Saturday Tradition).

Then Zach Wilson emerged, and Fields appeared to be a candidate for the San Francisco 49ers at No. 3. He became the betting favorite for them following his second pro day. Now, though, there’s a chance that he’ll be the last of the top five quarterback prospects off the board.

According to Rapoport, the 49ers are down to Mac Jones and Trey Lance.

Fields could still be a top-10 selection, of course, but a lot will depend on whether teams like the Atlanta Falcons, Carolina Panthers and Denver Broncos are willing to gamble on a quarterback. NBC Sports’ Peter King doesn’t believe that teams are that eager to trade into the top 10.

“The 49ers ruined the market by trading two ones to move nine spots,” one general manager told King.

It’s difficult to gauge Fields’ draft range right now, which is a huge departure from where we were early in the process. Fields was once considered a candidate to go No. 1. Now he’s likely to be the fourth quarterback off the board at best.

Notre Dame’s Jeremiah Owusu-Koramoah appears to be one of the most talented defensive players in this draft class and a possible high-first-round selection. B/R’s big board 3.0 has him ranked as the 14th-best prospect.

However, there’s a chance that he’ll fall to the bottom of Round 1 or even to Day 2. The issue, according to Breer, is that Owusu-Koramoah doesn’t have a defined position in the NFL.

“Everyone sees him a little differently—some might use him like the [New England] Patriots use Patrick Chung in their defense, while Ryan Shazier is the comp for others—and what you hear is that ‘You have to have a plan’ for him,” Breer wrote.

As Breer pointed out, this was the same issue with Isaiah Simmons, and teams could be scared off because of his rookie struggles. The Arizona Cardinals took him eighth overall in 2020, and he ended up playing just 34 percent of the defensive snaps.

NFL Media draft analyst Chad Reuter recently mocked Owusu-Koramoah to the New Orleans Saints at No. 28. As is the case with most prospects, a lot will depend on which positions are targeted early on Day 1.

However, it’s becoming clear that Owusu-Koramoah is a player with top-15 potential who is far from a top-15 lock.

From a talent standpoint, Alabama wide receiver DeVonta Smith is worthy of a top-10 selection. He’s the fifth-ranked prospect on Bleacher Report’s draft board, but there’s virtually no chance he’ll go anywhere near that high.

Even though Smith racked up 1,856 receiving yards and 24 touchdowns from scrimmage last season, he revealed last month that he’s just 6’1″, 170 pounds, and his size could concern some teams.

CBS Sports’ Jonathan Jones, for example, recently mocked Smith at No. 15 (via the Patriots) to the Detroit Lions.

The other issue is that there are several pass-catchers to consider at the top of Round 1, including tight end Kyle Pitts, Ja’Marr Chase, Jaylen Waddle and recent riser Kadarius Toney.

“Kadarius Toney, I think that guy might go top-15. I think he might even go before Smith,” NFL Network’s Peter Schrager said on the 2 for 1 Drafts podcast (h/t Adam Hermann of NBC Sports Philadelphia).

Depending on how deep the early run on quarterbacks goes, we may only see one or two pass-catchers drafted in the top 10. This could indeed push Smith toward the middle of the first round or even further, which would be quite a slide for the reigning Heisman Trophy winner and one of the most complete on-film receiver prospects in recent memory.