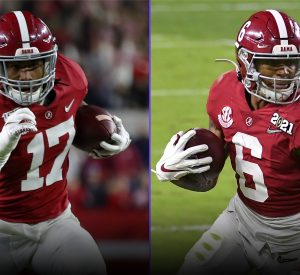 Alabama likely will have a pair of receivers selected in the first round of the NFL Draft for the second consecutive season.

DeVonta Smith and Jaylen Waddle are projected to be first-round picks in the 2021 NFL Draft — one year after Henry Ruggs III and Jerry Jeudy were selected in the first round in 2020. Yes, those guys all played on the same team in college.

It was a draft-day surprise last season when Ruggs was taken with the No. 12 pick, three picks ahead of Jeudy. Will the 2021 NFL Draft offer a similar surprise with Smith and Waddle? Which player is the better NFL bet?

Smith became the first receiver to win the Heisman Trophy since 1991 with an incredible season that included 117 catches for 1,856 yards and 23 TDs. He averaged 15.9 yards per catch. Smith is an outstanding route runner who evolved into the complete receiver for the Crimson Tide.

Smith is listed at 6-1, 170 pounds, and those questions about his weight have persisted throughout the draft process. He declined to run the 40-yard dash at Alabama’s Pro Day.

Waddle was one of the most exciting players in college football the last three seasons. He was a first-team SN All-American selection as a returner in 2019, and he had 28 catches for 591 yards – an average of 21.1 yards per catch – with four TDs before suffering a leg injury in Alabama’s sixth game this season.

He returned for the CFP championship game, but he was still limited because of the leg injury. Waddle is 5-foot-10 and 182 pounds, and he also declined to run the 40-yard dash at Alabama’s Pro Day.

Smith and Waddle were 1A and 1B in Alabama’s high-powered passing attack, and Waddle was the leading receiver at the time of his injury. Smith, however, went on a tear for the remainder of the season – which included a record-setting performance in the College Football Playoff.

Smith and Waddle’s versatility is what might separate them from the other first-round picks. Both showed they can play on the outside, but they could each seem time in the slot – especially as rookies. Both also could be involved in the punt return game, though Waddle is a better bet for that early in his career.

MORE: Ranking the top WRs in the 2021 NFL Draft

SN’s Vinnie Iyer has Smith landing with the Detroit Lions at the No. 7 pick in our seven-round mock draft.

“The Lions would be ready to jump on Ja’Marr Chase should he slip and also will need to give thought to Smith’s former Alabama teammate, Jaylen Waddle. Ultimately, after being gutted at the position in free agency, they need to go with the best all-around No. 1 available.”

At that point, Smith would be the second receiver taken in the 2021 NFL Draft behind LSU’s Chase, who totaled 84 receptions for 1,780 yards and 20 TDs as a junior before opting out last season. Miami (No. 6) also could draft Smith and pair him with former Alabama quarterback Tua Tagovailoa. Carolina (No. 9) also could be in the mixt for Smith in the first round.

SN’s Vinnie Iyer has Waddle landing with the Los Angeles Chargers with the No. 13 pick in our seven-round mock draft.

“The Chargers will be locked into Waddle should he slip out of the top 10 as a new big-play target for Justin Herbert to complement Keenan Allen well and become a field-stretching upgrade over oft-injured Mike Williams.”

That’s a good landing spot, but Waddle’s big-play ability could land him anywhere from No. 6 with Miami – the same rules apply with Tagovailoa – to No. 12 with Philadelphia – where Waddle could reunite with former Alabama quarterback Jalen Hurts.

Who is the better NFL bet?

Unlike 2020, we do not think the expected draft order will flip. Smith likely will be drafted ahead of Waddle, but that doesn’t mean the latter won’t have a more productive rookie season.

Of Alabama’s five previous first-round picks, Cooper had the most yards and receptions and Ridley had the most TDs. Smith and Waddle figure to challenge with numbers somewhere in the middle, and this is the standard they will be judged against.

Now, it’s just a question of who comes next from Alabama.