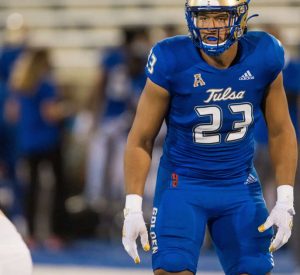 With both the top two cornerbacks and top three wide receivers off the board, the Cardinals went in a different direction Thursday night during the first round of the NFL draft and selected former Tulsa linebacker Zaven Collins with the 16th overall pick.

Jaguars pick Trevor Lawrence at No. 1. Here is what they’re getting

It’s the second straight year the Cardinals have drafted a linebacker in the first round following the selection of Isaiah Simmons at No. 8 in 2020.

The 6-foot-5, 259-pound Collins started getting linked to the Cardinals in the past week to 10 days as a viable option, considering it didn’t seem likely that cornerbacks Patrick Surtain II from Alabama or Jaycee Horn from South Carolina would be available. Ditto with wide receivers Ja’Marr Chase from LSU or Jaylen Waddle and DeVonta Smith from Alabama.

Start the day smarter. Get all the news you need in your inbox each morning.

Each of those top prospects went within the first 10 picks, with Chase going to the Bengals at No. 5, Waddle to the Dolphins at No. 6, Horn to the Panthers at No. 8, Surtain II to the Broncos at No. 9 and Smith to the Eagles at No. 10 following a trade with the Cowboys.

Collins was a quarterback and all-state linebacker at Hominy High School in Oklahoma before attending Tulsa, where after redshirting his first year, he stepped into a starting role an earned Freshman All-American honors. Last season as a junior, he recorded 53 tackles, 11½ for loss, with four sacks and four interceptions, two of which he returned for touchdowns.


Collins won both the Bronko Nagurski Trophy and the Chuck Bednarik Award as the nation’s top defensive player along with first-team All-America honors. Simmons, who won the Dick Butkus Award his final year at Clemson as the nation’s most outstanding linebacker, was named to the All-Rookie team last season by the Pro Football Writers of America.

The scouting reports on Collins have all been mostly glowing, starting with his combination of size and athleticism for a linebacker. He has range to make plays all over the field, is outstanding at attacking blockers and pushing them back and has great burst and length to track down runners from the backside. He’s also noted for his relentless second effort as a tackler.

He needs to sharpen his instincts and pursuit and could stand to be more aggressive in certain situations. If the Cardinals plan to let him also rush the passer, Collins is going to need to improve his outside pass-rushing skills.

Have an opinion on the Arizona Cardinals? Reach McManaman at bob.mcmanaman@arizonarepublic.com and follow him on Twitter @azbobbymac.