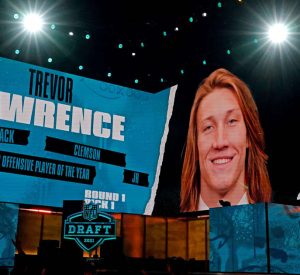 Jaguars pick Trevor Lawrence at No. 1. Here is what they’re getting

Day 1 of the 2021 NFL draft was about as dramatic as any in recent memory.

How many first-round preambles include breaking news that the league MVP wants to leave the team he’s called home for 16 seasons? And good luck dredging up an NFL “Player Selection Meeting” that had more quarterback drama once the draft began – especially considering the top two picks were shoo-ins – as this one did starting with San Francisco at No. 3.

© Kirby Lee, USA TODAY Sports
NFL commissioner Roger Goodell announces Trevor Lawrence (Clemson) being selected by the Jacksonville Jaguars as the number one overall pick in the first round of the 2021 NFL Draft at First Energy Stadium,


Throw in the requisite number of trades and head-scratching picks, and it’s little wonder how football player acquisition becomes such gripping theater on an annual basis – and especially this year.

With that, let’s kneejerk some champs and chumps from Thursday night.

NFL DRAFT TRACKER: Analysis on every pick in the first round

MORE: Team-by-team look at all 259 selections

FIRST ROUND: Patriots, Steelers selections among most intriguing picks

Reunion tours: Quite a few incoming players will be teaming up anew with their erstwhile college teammates. The Bengals grabbed LSU WR Ja’Marr Chase, who set SEC records with QB Joe Burrow, Cincinnati’s No. 1 pick in 2020. Alabama WRs Jaylen Waddle and DeVonta Smith will be playing with former Crimson Tide QBs in Miami (Tua Tagovailoa) and Philadelphia (Jalen Hurts), respectively. Finally, the Jaguars became the first team ever to draft a quarterback (Clemson’s Lawrence) and running back (Travis Etienne) from the same backfield in the same first round.

49ers’ smoke: After weeks of speculation that they’d pick Alabama QB Mac Jones with the No. 3 pick San Francisco paid so much for, coach Kyle Shanahan and GM John Lynch wisely invested in North Dakota State’s Lance, whose upside seems to significantly outstrip Jones’. And with a motivated Jimmy Garoppolo still on the roster, no need to rush Lance into action – though he could definitely use the reps given he’s played one football game in the last 16 months.

Offense: For the first time in draft history, the first seven players picked were on the offensive side of the ball. Overall, 18 players on offense were taken Thursday, one shy of the Round 1 record.

Jets GM Joe Douglas: His first draft came in 2020, so you could argue he didn’t have requisite time to save the previous face of the franchise, departed QB Sam Darnold, whom Douglas didn’t choose. But after deciding on a fresh start under center with BYU’s Wilson at No. 2, Douglas immediately went to work protecting his new investment – trading up for USC OL Alijah Vera-Tucker, who should team with 2020 first-round LT Mekhi Becton to give the Jets the makings of an ascendant offensive line in front of their baby-faced passer.

Justin Herbert: Last season’s offensive rookie of the year lucked out when Slater, his new bodyguard at left tackle, fell to the Chargers at No. 13.

Bears brass: Four years after whiffing badly on QB Mitchell Trubisky, Chicago GM Ryan Pace might have saved himself by snagging Ohio State’s Justin Fields by trading up to No. 11. Pace and coach Matt Nagy might get another reprieve as they groom Fields to be this franchise’s long-awaited passing savior.

Aaron Rodgers: The three-time MVP, who’s engaged to actress Shailene Woodley, proved a scene stealer himself. ESPN reported hours before the draft began that Rodgers has expressed to Packers brass that he wants to leave the organization in an apparent power play that could come to define the look of the 2021 season if he gets his wish.

WHITHER RODGERS? Nine teams that might fit unhappy MVP, though trade with Packers would be complex

Giants GM Dave Gettleman: Long fearful of getting “fleeced” in his eight previous NFL drafts as a general manager (with Carolina and New York), he finally took the plunge and traded back from No. 11, getting the Bears pick at No. 20 in a package that also netted a first- and fourth-round choice in 2022.

Mac Jones: After the 49ers ultimately bypassed him for Lance, Jones sure looked pretty stoked to be going to New England and the opportunity to be Tom Brady’s long-term successor – even if some are going to irresponsibly compare him to TB12 given outward similarities to their games … among other traits.

Mac Jones: Had he gone to the 49ers third overall, his first contract would’ve been worth approximately $34 million over five years. By falling to New England at No. 15, Jones stands to make about $15.6 million through 2025.

Giants GM Dave Gettleman: He’s probably not moving at all if his NFC East rivals, the Eagles and Cowboys – their picks originally sandwiched Big Blue – don’t gang up and make an intra-divisional trade, Philadelphia coming to get Smith, whom the Eagles clearly believed the Giants would take at No. 11 if they didn’t flip positions with Dallas.

Aaron Rodgers: By taking Georgia CB Eric Stokes, Green Bay perpetuated a now-annual tradition of not getting Rodgers first-round assistance in Round 1. That aside, Rodgers risks taking on a villainous role – not that he seems to mind – depending upon how his situation unfolds and how it plays out in the Pack locker room. Please phrase your speculation in the form of a question.

Stokes: Poor guy. His big day will forever be a footnote to the Rodgers news, which is sure to overshadow whatever players the Packers pick this year.

Justin Fields: Sure seems like he deserved to go earlier than 11th … and to a better offensive team than Chicago.

Safeties: None were called Thursday. Oof.

Roger Goodell: For the fifth time in seven years, the No. 1 pick of the draft didn’t show up to shake the commissioner’s hand on draft night … though Burrow can be forgiven for not coming to Rog’s basement during the pandemic.

Goodell’s lounge chair: Made famous when the commish announced the picks from his suburban New York home in 2020, it had a lot of fans’ butts cycling through it Thursday night when the league saw fit to bring it to the stage in Cleveland. Get that thing deep cleaned, fellas.

QBs drafted in 2011: On the 10th anniversary of arguably the greatest draft ever, veteran passers Cam Newton (Patriots) and Andy Dalton (Bears) got bad news as their teams tabbed Jones and Fields, respectively. Presumed 2021 starters 24 hours ago, Newton and Dalton are suddenly much more precariously positioned.

Carson Wentz: Did the Colts make a mistake by not picking a left tackle to protect the man who was sacked a league-high 50 times (in just 12 games) last year? Virginia Tech’s Christian Darrisaw was on the board, but Indianapolis took Michigan DE Kwity Paye.

‘Sweet Caroline’: What is this? A Red Sox game? Neil Diamond’s tune brought the draft to a halt before the Titans picked at No. 22, even Goodell getting caught up in the swaying crowd. Not a song befitting the city that’s home to the Rock & Roll Hall of Fame.