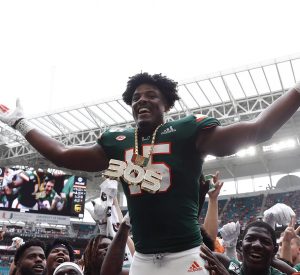 —Young (21 years old), but experienced playing multiple roles as a base edge defender and a third-down interior pass-rusher.

—Length will be a clear mismatch for smaller but more agile offensive tackles.

—In terms of his pure traits, his separation off of blocks is his most well-developed area of his game.

—Young on film, as he was last seen as a redshirt freshman pass-rusher who played high school football as a safety.

—Clearly understands his run fit, even if he is not resetting the line of scrimmage.

—Played inside often as a pass-rusher, which gives one pause as to what his edge-rushing game will look like against professional tackles.

—Most of his box-score production came from effort sacks, though his pressures were more impressive than his sacks.

—His length works against him at times, as his pad level can rise too high.

—First step is nothing to write home about.

—Beyond playing on the line of scrimmage, Rousseau also played safety (even as a senior) and wide receiver as a prep in Florida.

—Took a medical redshirt in 2018 when he injured his ankle as a true freshman.

—Opted out of the 2020 season after coming off of his ACC Defensive Rookie of the Year campaign in 2019.

Gregory Rousseau is this draft class’ Rorschach test. On one hand, you see a lengthy defensive lineman with plenty of early production for a player who turns just 21 years old a few weeks before the draft and only recently started seeing full practice time at the position. On the other hand, you see a defensive end who filled his stat sheet up with effort sacks on the interior as a 265-pounder and only has one year of production.

To a certain extent, both arguments have merit, as Rousseau has one of the widest ranges of outcomes for a player in this draft or even in recent memory. Some argue, beyond playing on the edge, his best path to success at the NFL level could be as a heavy end who kicks inside—it’s a long trajectory for a high school safety, but it goes to show you just how unique of a prospect he is.